The Ministry of Health and Wellness announced today that the BA.5 subvariant of COVID-19 is in Belize.  The Ministry said today that genomic sequencing of forty samples between June 1 and 28 has confirmed that all the samples tested were of the Omicron variant. Thirty-nine of the samples were the BA.2 subvariant and the other one was BA.5. The Ministry says however that the BA.4 and BA.5 subvariants are main ones circulating in the US and across the globe at this time. People who’ve tested positive for these subvariants present varying degrees of symptoms, which range from runny nose, sore throat, headache, fatigue, cough, body aches and fever.  Doctor Melissa Diaz-Musa, the Ministry’s Director of Public Health and Wellness spoke on the issue. 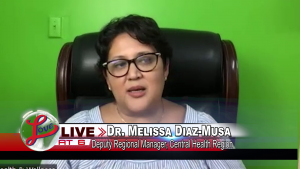 Dr.Melissa Diaz Musa, Deputy Regional Manager, Central Health Region: “The BA 5 is now in 70 or more percentage of the samples done in the US they are detecting BA 5 and we do know that persons have described worsened symptoms with BA 4 and BA 5 and there has been significant mutation in this subvariant and for that reason it looks like changes in the protein of the variant so many things it’s difficult for us to say what the extreme of the symptoms will be and how it would change things in Belize at this point but we know that in the US that is the dominant subvariant at this point but they are not reporting increased hospitalizations and in other countries around the world who have been going through a BA4 and BA5 wave the hospitalizations have been more or less similar but the severity of the illness is more so persons at home have more of a cough, chest tightness, fever, body aches, diarrhea these are more of the symptoms that are being presented at this point.”

The Ministry reports that between Friday and today, there were 560 new infections. Belize District reported 198 of those new cases, 155 of which were in Belize City. Cayo District reported another 138, which includes 43 in San Ignacio and Santa Elena, 21 in Belmopan and 18 in Benque Viejo del Carmen. There were 74 new cases in the Orange Walk District, 46 of which were in Orange Walk Town. The death toll stands at 680 and active cases are 715. Three people are in the hospital.