The mother of the minor who appeared in a video on social media consuming rum has come forward. Last week when the video went viral, there was an outpour of public outrage at how the five-year-old boy was being encouraged to drink white rum, to use profanity and to endorse a specific gang. According to the boy’s mother, Maria Maldonado, who spoke to our colleagues at Plus TV on Friday, the minor was removed from her custody. She says she is upset over the situation and that she was at work when the video was brought to her attention. According to her, it was the boy’s older cousins who recorded the child drinking alcohol without the knowledge of his parents. 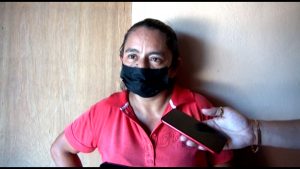 Maria Maldonado, Mother of Child Videoed Consuming Alcohol : “I was at work when someone called and told me about a video of my son and I got surprised because I didn’t know about it. Then I didn’t have any idea of when that had happened, it was supposed to be on a weekend when I was working and he was at home with his father. The father said that some of the cousins had passed and they told him that they would take the little boy for a walk to their house and they took the little boy and right there they did that with him. When I reached home the baby was already back at home like nothing had happened. I never knew about it. It was the weekend when I worked. When I reached home my baby was at home but then his father said that he went to take a little walk with his cousin and then he didn’t know what was happening so we were surprised when we saw this video so we gave up the persons’ names already. We already suspect who did it. Social workers took my son away from me and I haven’t seen my son. From yesterday evening they have had him. Like today we tried to locate the persons but we didn’t find them at home. Some one of them called today and said that he will go to the station and give the details so I’m waiting for it and later I went to circle back and check on them.”

Reporter: What would you like to say to people out there who saw the video and they’re like, mien, I can’t believe the parents would allow such a thing to happen. What would you say to them?

Maria Maldonado, Mother of Child Videoed Consuming Alcohol : “We never would allow a thing like that to happen. We as parents, I would never let that happen to my child.”

The incident was condemned by many government entities who had called for the child’s removal from his home.