The Belize Police Department remains on high alert for MS-13 gang members fleeing to Belize. These gang members are fleeing El Salvador where President Nayib Bukele decreed a state of emergency to address gang-related crimes. Thousands of gang members have been locked behind bars and those who’ve managed to escape are fleeing to Central American countries. Several MS-13 gangsters have been detained in Belize and according to Police Commissioner Chester Williams, more are believed to be in the country. 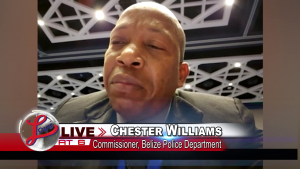 Chester Williams, Commissioner of Police: “We must ensure that as a nation, as a police department working in conjunction with the Belize Defence Force that we do what we can along our borders to be able to prevent these illegal migrants from coming over into our country and continue their criminal activities. And so yes we had been on high alert since the new measures were implemented in El Salvador and we have since detained a number of these gang members from Salvador, they have been charged by immigration, they are in prison remanded or serving sentence and we are hoping that whenever their sentence is over that we should be able to return them back to their respective countries so it is something we are dealing with as a country and we’re working in conjunction with BDF and the immigration department to make sure that we address this as quickly as we possibly can so that they don’t think that Belize can be a safe haven for them. We have enough problems at home and we cannot carry the burdens of other countries within our country so we must do our best to make sure that they don’t see us or see our country as a safe haven for them.”

Reporter: Belize has porous borders do you expect that more will be caught in the country here ?

Chester Williams, Commissioner of Police: “Well certainly we do expect that there are more in the country and more will come and that’s the reason why we have asked the assistance of the public to report any person who they believe may be a member of MS-13 and even if it is that the person they report is not it is always best to err on the side of caution. We will go and check the person out and see who they are and if they’re not members of MS-13, they’re Belizeans and – we’re going to release them from custody but if they are MS-13 or persons who are here illegally then we will do what needs to be done to ensure that corrective measures are taken.”