In an unprecedented move, the National Evangelical Association of Belize (NEAB) is uniting with the Catholic Church on their stance against the Marijuana Bill. Earlier in the week we told you of the Catholic’s Church opposition on the matter when the church released a pre-recorded message. NEAB has now jumped on board the campaign against the legalization on the bill and gathered in front of the National Assembly in Belmopan during the budget debate. Correspondents Fem Cruz and Pauline Tillett were there and spoke to the participating religious leaders. Louis Wade Junior of the Nazarene Church and Pastor Scott Stirm of the Evangelical Church both raised major concerns on what would happen if marijuana is legalized.

“We think that the government should actually have a referendum and that would put things to rest because I feel the majority of people in this country are not in for this new move towards having more marijuana planted and pushing the economy to be subsidized or helped by marijuana planting whether it’s for drugs or whether it’s for medical things it’s gonna create more problems. So I think a referendum should be done on it and I think that will settle most of the fears. We have read what the Catholics were saying and we are 100% in agreement on their marijuana opposition so we are in line with the Catholic statement that came out recently. They are against us because they see the destruction, we see the same destruction and so we don’t need to reinvent the wheel. We are one with them against this marijuana bill.”

“We think there are many ways of getting money for the economy, green spaces, we have agriculture, we have so many things going, tourism that we do not need to plant a product that we are not sure of the effects – we are sure of the effects I should say because I’ve seen what it is done in places like Colorado, United States wherever. It has destroyed communities, it might have brought in money but that money is at a high price and that price is the price of souls, the price of life. We are looking at what has happened in Mexico the cartels have moved into various parts of Mexico taking control and people who are in that will want to get more and if Belize opens the door they will come in and for sure we will be destroyed.” 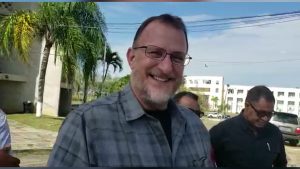 “Is Belize ready for that? I say no. The worst thing about that they say that you legalize marijuana and it eliminates the criminal faction and the cartels the truth of the matter is authority says this operation they busted last year was one of 278 cartel operations that they have busted in the state of Colorado. I thought that the black market was supposed to disappear, I thought the criminal element is supposed to disappear it’s just not true.”

Essentially, the NEAB leaders are now calling for the government to hold a referendum before the amendments to the Bill are passed.

“If it goes even further than that because the government has admitted publicly that this is a cash only industry. You know I thought that that would have been the deterrent. I thought that if there ever was a deterrent for a sensible government to stay back from marijuana it would be the issue of our banking institutions that cannot hold the money. Our government in knowing that we live in a human trafficking and drug trafficking regime where our banks have been derisked before because drug money has found in it is now legalizing a cash only industry. This is sending a direct signal to cartels that their dirty money is welcomed here in this industry to be washed. And that is why I believe that the Roman Catholic Church has called it and marijuana republic because what it does is it allows a legitimate way for illegitimate dirty money to be cleaned in our system and I believe that Belizeans need to understand that the government is creating a cover for dirty money to be laundered through the marijuana industry.”

“We do strongly believe that the people should decide an issue like this with referendum every other nation at end state in the United states that legalized marijuana did so by referendum except for the country of Belize.”

In the near future we will be seeking a response from the government on this issue. 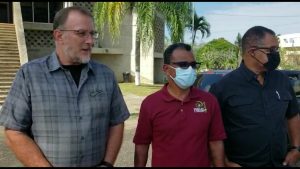