The National Emergency Management Organization (NEMO) has been preparing for this year’s above-average hurricane season for several months. Today, the organization held a press conference to brief the media on the work that it has been doing to ensure the nation is prepared in the event of a hurricane. The management says it has already reviewed emergency plans, inspected shelters, cleared dangerous debris from near power lines and according to the National Coordinator, Retired Lieutenant Colonel, Shelton Defour, the organization is now restocking its warehouses.

Ret’d Lt. Col. Shelton Defour, NEMO Coordinator: “We also are in the process of looking at the needs of the public in terms of restocking our warehouses with emergency supplies so that once we activate and we need to roll out assistance in the form of food, water, mattresses, hygiene kits and the likes, we have those basic frontline stocks available to provide support to the people who are affected by disasters and finally, in terms of a key element of our preparation, we just concluded this morning along with the representative from Belize City Emergency Committee aka CEMO, Ms. Dawson sitting to my left. We had a very interactive session pertaining to actions to be carried out in the event Belize is affected by a Category 5 hurricane where all the NEMO staff from around the country were present. We dubbed that session ‘Everybody Must Be On The Same Page.’ Meaning that if we say we are declaring Phase 1, every district coordinator from north, south, east and west including CEMO, clearly understands what actions should be taken and what those requirements are. So we are now better synchronised in terms of understanding what we need to do for Belize in terms of dealing with the response to a major event such as a Category 5 hurricane.”

NEMO works alongside other agencies such as the City Emergency Management Organization (CEMO) to lessen its workload and safeguard citizens. CEMO Liaison officer at the Belize City Council, Melanie Dawson, spoke about the evacuation plan for folks in the city. 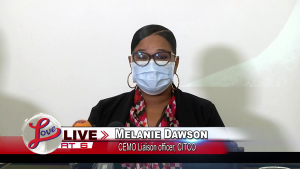 Melanie Dawson, CEMO Liaison Officer, CITCO : “When it comes to our state of readiness in Belize City, we have started preparations from December up until now and one of our major roles and responsibilities is we have to deal with the evacuations from the cayes coming to the city and going out to Belmopan and Cayo. So with that said, we have our meetings with the personnel to gather our information, we come up with our routes for the city. I would say we do simulations as well to see how rightly these routes would fit because as you all know, if we get a warning or a storm is coming, sometimes the streets, the roads get blocked so with our plan in place, I would say that the evacuation route would definitely play a huge role. Now to start off, the routes are set by constituency. We have a pick up point in each constituency. For example, in the Collet area, we have a pick up point at Unity Presbyterian. From there, they will be transported to Belmopan and that is basically how the evacuation route is set up, a pickup point from a  school and then you will be evacuated out of the city to a shelter in Belmopan.”

A major component of NEMO’s evacuation plan is its implementation of screening for persons who may have COVID-19 at the time of a disaster. Defour, says this initiative will be done for all persons who wish to seek refuge at shelters to ensure the safety of all.

Ret’d Lt. Col. Shelton Defour, NEMO Coordinator: “We will do screening similarly to what you mentioned that upon arriving at a shelter, persons will need to show their status in terms of vaccination because it impacts on shelter space. If you’re not vaccinated, the classrooms which we normally put 30 persons in will only be able to house 10 so we lose a considerable amount of shelter space so if you’re vaccinated then we could increase the shelter space to about 20 persons per classroom which means more people can shelter. For persons who have COVID or showing signs of COVID the screening with the Ministry of Health Rep will have them quarantine at a particular sector or section of that shelter to be able to reduce the amount of spread within the compound of those buildings which are used as shelters and the plan speaks to, if you have, for example, an area, a community where two buses are coming and most or persons declared to have symptoms or are COVID positive or whatever the case may be and they need to move out of harm’s way because in emergencies these are the types of scenarios that will come up then one of the buildings on that compound would be declared as a COVID shelter then everybody would be housed there in a quarantined manner and then supervised by the Ministry of Health because COVID or not, we must protect the lives of our people.”

Defour also emphasized the need for every citizen to have a plan to ensure that they remain safe during a hurricane.