Fishers from the Sarteneja Village in the Corozal District are also up in arms about the new Fisheries Regulations.  Reporter Giovanna Moguel spoke to the angry fishermen.

Giovanna Moguel, Love FM News: A group of fishermen from the northern coastal community have come forward to express their discontentment with the new fisheries regulations which include prohibiting them from capturing lobsters with the tail weight of less than 4.5 ounces and amending the specification of the number of traps allowed per fisher, fishing vessels, and the areas where they are allowed to be deployed. A fisherman from Sarteneja, Neftali Verde, explained that they believed that the Government of Belize has mandated orders without taking into account the impacts it has on the industry. 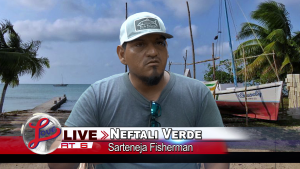 Neftali Verde, Sarteneja Fisher: “I’m seeing that the best areas, and where we had our camps is of the best areas that conch and lobster is reproducing very fast and the best fishing grounds are right around there and they’re putting reserves on somewhere else and not the area that should be.”

Giovanna Moguel, Love FM News: Verde clarified that the fishermen community support the efforts put into conservation of the marine ecosystem and Blue Economy. However, they stated that they do not agree with how it is managed as it now poses a threat to the livelihood of Belizean fishermen. Antonio Arceo is also a fisherman from the Sarteneja village and he states that these regulations will not only affect fishermen but also consumers. 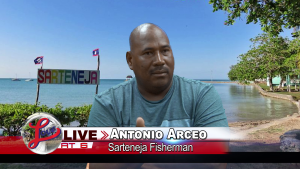 Antonio Arceo, Sarteneja Fisherman: “Like you said. You mentioned about why the lobster  is, and the conchs are, the price are going up right? Well the price will go up for us because the cost of gasoline, ice.

Antonio Arceo, Sarteneja Fisherman:  “Yes that we have on the boat. Then we have to increase salaries too right?

Giovanna Moguel, Love FM News: The group of fishermen stated that this increase of .5 ounces signifies a 40% revenue loss for about 300 fishermen and families.

Neftali Verde, Fisher: “So imagine if you’re doing, used to do $500 on a trip. With the 4.5, you will make $300. You have to pay $200 in expenses. You will remain with $100 for 10 days working hard. What are your kids going to eat if you have somebody going to high school? Your passage to go and come back which is $30. What will happen with the fishermen? The ones that are up there, they don’t know about this because they have a set salary. We don’t have a set salary. I believe that for the Government, we are nothing. We are like the Lionfish. We invade everywhere. But the Lionfish has a big value, even if it is poisonous. Right? So the fishermen, they feel the same way. They just kick them out putting reserves and raising up the ounces on the products and everything but we have no alternatives. We understand. We need alternatives.”

Giovanna Moguel, Love FM News: Verde also stated that consultations with fishermen and other stakeholders of the community regarding the implementation of new regulations have not been done. The fishermen are adamant that the Government must take into consideration the impact that this will have on hundreds of families. Reporting for Love News, Giovanna Moguel.