President of the National Women’s Commission, Thea Garcia –Ramirez, represented Belize at the thirty-ninth Assembly of the Inter-American Commission of Women (CIM) in Panama. The assembly was held under the theme “Building Bridges for a New Social and Economic Covenant led by Women”. Garcia-Ramirez explained that the forum provided a strategic opportunity to exchange experiences. She says that less value is given to the work that women carry out in the household. She said that especially during the pandemic, women were the ones to bear the brunt of all the household chores in addition to assisting children with online learning. 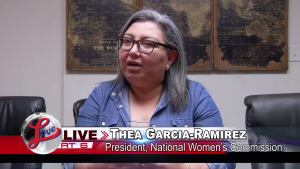 Thea Garcia-Ramirez, President National Women’s Commission: “Well you’re talking about parity and women’s rights. So when you’re in a group, in a room filled with a group of women that have the same goals and are from the region, you get a chance to learn a lot and to, there’s an exchange of ideas and experiences and not everything works for everyone. Certainly, the experiences that they have had whether it be with trying to advance legislature, whether it be with programmes for the environment of women and whether it just be outreach and advocacy then we can learn, certainly, take a lot from them and try to implement what would work for us and just don’t what doesn’t fit and doesn’t work for our society. Now it is up to Belizeans and it is up to the society to make sure and especially women because the majority of the campaigners, for all these men that represent us in Government are women and women vote for men. And so, really what we’re saying is that now it is up to women to try and make sure that the Government is really representative of the society and that would mean parity at all levels. I think the burden of those home chores and care, because you have to come back and take care of you children shouldn’t be left only on women. I think that as a society, as we evolve, as our consciousness grows, I believe that that burden should be taken up, a part of it should be taken up by the state. For example, when women work there is no system for child care in this country and I think that needs to be looked at. I think as a mother I would work better knowing that my children were well taken care of, you know, because it gives you a peace of mind.”