A new senator has been elected to represent the non-governmental organizations. The results of the election were released earlier today with Janelle Chanona garnering the twenty one of the thirty-one votes and Dr Sharmayne Saunders receiving the remaining ten. Nominations were done last week with Chanona being nominated by the Belize Audubon Society, the Belize Tourism Industry Association and the National Garifuna Council. According to Chanona the entire process has been quite exciting.

With Chanona to be sworn in within the next two weeks, she told the media that she is aware of the importance of such a post and how she plans to use this appointment to stand up for the NGO sector.

Senator, Oceana Vice President, Janelle Chanona: “The commitment that I’ve made to the membership, and that I reiterate now, is that the voice of the senate, senator representing the NGO community will always be that of its membership and then when I say membership, not just those formally working in the NGO sector but all of those NGOs doing NGO work outside the official threshold of NGO work because it has to be that the issues as you said, the wide ranging do get that platform at the upper house and do get the attention they deserve. It’s been incredible in the various committees and organisations and entities that I work alongside, dealing with crime, dealing with women and children issues and just the whole gamut of the social sector that sometimes there’s so much going on and then yet there’s, it’s not being spoken about in certain circles. So definitely that is a commitment that I have made personally to the membership that it will be inclusive, that it will be comprehensive. The commitment is definitely that we have to be inclusive and we have to get multiple perspectives. That is the only way that we can move forward, if we’re all on the same page. We will never have 100% agreement but certainly once we can incorporate everybody’s perspective we can make as an informed position as possible as the community that has the best interest of all the Belizeans that we’re working alongside at heart and being moved forward from there.”

Janelle Chanona is a former journalist and news director and currently serves as the Vice President of Oceana. 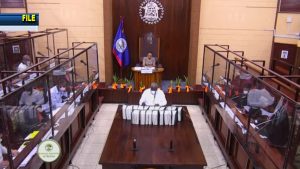