In response to the effects caused by flooding, Orange Walk NEMO was fully activated. Several teams were deployed around the town and villages to assess the damages and begin executing evacuation plans. Chairperson, Carla Alvarez, explains that it is important for persons to call for assistance at an early stage because as the weather conditions worsen, the evacuation process can get dangerous. 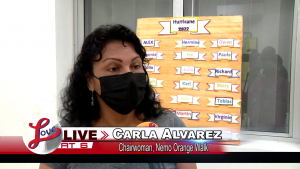 Carla Alvarez, Chairwoman, NEMO Orange Walk: “We did one assessment around three o’clock this morning of course under the cover of night so that was probably a lot that we weren’t able to see but we currently we have four teams out right now. We have gotten reports from two teams for example my team went to San Antonio and Santa Cruz. The river has risen maybe about an inch or two above normal but nothing to be alarmed about. The waters have receded in town and also in San Pablo so right now we don’t have flooding in San Pablo, San Jose, Douglas, Santa Cruz. We’re waiting to get word from Guinea Grass and Santa Martha. As I said all of our committees are fully activated and so we are prepared meaning that public officers are on standby because more than likely we might have to open shelters. We just got a report of a family that needs to be evacuated somewhere here in town. I think a lot of families although they might have water even going into their house they’re hesitant about leaving their home because they’re afraid of looters or burglars coming in so many people hesitate to leave their homes and it’s only when the water has risen too much or really damaged the house that they have to leave. It is a risk for us the committee members especially if at the very last minute they decide to evacuate and it’s especially when it’s at night because then that poses a threat to even us here.”

In anticipation of more rain over the incoming days, Alvarez says that there are excavators in several vulnerable areas to clear blocked culverts and drains.