Several families in Orange Walk have been affected by the torrential rainfall that occurred over the weekend. NEMO issued its second advisory this afternoon, saying that a slow-moving tropical wave continues to affect the country tonight. This comes after an area of low pressure caused flooding in the northern districts on Sunday. As a result, some areas in Orange Walk and Corozal have already seen upwards of ten inches of rainfall during the past seventy -two hours. This has some families tonight trying to salvage what has been damaged by the downpour. Images show a large area at the entrance of the town underwater. This has not happened in a very long time and has residents concerned. Love News was in Orange Walk today and reporter Geovanna Moguel has the latest.

Giovanna Moguel, Love FM News: Within the last twenty-four hours, incessant and heavy rains left several Orange walk residences submerged under water. Persons living near creeks and in low-lying areas were cautioned to be on high alert as the water rose. Mayor of the Orange Walk Town Council, Ladrick Sheppard, held a meeting this morning to discuss how they would execute a recovery plan. Sheppard says that despite the criticisms, the floods were not a direct result of clogged drains. He explained that the drains simply were not capable of holding the volume of rainfall that came as quickly as it did. 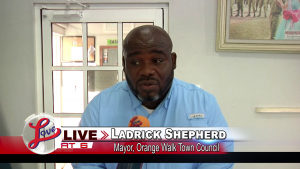 Ladrick Sheppared, Mayor, Orange Walk Town Council: “That three hours of rain was no joke. I’m talking about thunder, lightning, and rain, rain, hard rain. That was basically what happened and we realised that the volume of water that dropped was too much for our drainage system. It overflowed. There’s about 16 major areas that got flooded out. That was the assessment that we found out. We are doing our best to see if we can change some of the culverts that are too small and cannot hold the impact of water that flows there because we don’t want this to happen again, to repeat itself.”

Giovanna Moguel, Love FM News: One area that was affected was the Marcus Canul Area, which is situated near a creek. San Pablo Street resident, Filogonio Novelo, told Love News that his property did not experience flooding; however, the water that accumulated on the street just outside his house has made it difficult for him to go downtown.

Filogonio Novelo, San Pablo Street Resident: “I saw that the water was rising and rising and as I looked around, I saw like a sea of water all around the place. Like around 6:30, I drove a little ahead to see and, mien, the houses looked like a little island because all around it was water and water. I believe that they need to lift up the street more in order for us to be in a safe area and also the drains. The dain here is very messed up. They need to clean the drains in order for the water to run and then that creek that is over there also it needs to be cleaned so that the water can run.”

Giovanna Moguel, Love FM News: Although Novelo believes raising the streets would solve the problem, not all of the residents can say the same. Just down the street, Francisco Roberts and his family were up until the wee hours of this morning bailing out water from their house. Roberts says even his makeshift London bridge got washed away. 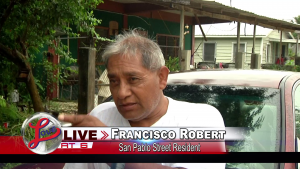 Fransisco Roberts, San Pablo Street Resident: “Last night it was flooded, from, I would say from the beginning of the paving, everything was covered with water here. Well inside, because I have sheetrock and then the sheetrock got wet and then we had to change the sheetrock.”

Giovanna Moguel, Love FM News: In the midst of houses being infiltrated by water, part of a culvert washed away. This led to traffic being diverted through the Guinea Grass and Palmar Road. NEMO Chairperson, Carla Alvarez explains that this was quickly resolved so as to not obstruct traffic for very long.

Carla Alvarez, Chairwoman, NEMO Orange Walk: “The culvert was partially washed away yesterday evening and in a matter of hours last night, basically, that was repaired but I do want to ask motorists to be very careful, to exercise caution because, I mean, obviously the repair that has been done is something, you know, temporary and the rains continue so I would ask that motorists please slow down in that area.

Giovanna Moguel, Love FM News: While the waters have swiftly subsided, the weather forecast for the remainder of the week seems to be on the wet side. Mayor Sheppard says the town council is doing their best, but the community needs to work along with them.

Ladrick Sheppared, Mayor, Orange Walk Town Council: “If I’m not mistaken, less than one month, we just had couple, three weeks ago we had a rain that hit us for about an hour and a half and it flooded the whole of Orange Walk but it went down fast. People’s houses were flooded out. This is the second one so I asked the residents, I urged them work with us man. Work with us. Find a way to dispose of the debris and if you have it and maybe you’re residents that cannot move and if you don’t have anybody that can assist you give us a call at Orange Walk Town Council so we can go over there and assess this problem because at the end of the day when you think that the dirt is going inside the drain is only affecting you, it’s affecting the other neighbours on the side as well too.”

Giovanna Moguel, Love FM News: So if you absolutely need to leave your house, stay dry and stay safe because the forecast indicates more trouble. Giovanna Moguel for Love News.