Police in Orange Walk remain on high alert following a murder last week. Investigators have yet to identify the shooters that fatally shot Reynaldo Marchand and injured Nazir Vasquez. The shooting is believed to be drug-related and there is the expectation of retaliatory action. Hipolito Novelo reports. 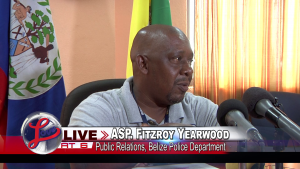 ASP. Fitzroy Yearwood, Public Relations, Belize Police Department: “To, how to say it, prevent any further fatality, we went into what you refer to as an Emergency Defense Mode but the bottomline is to prevent retaliation.”

Hipolito Novelo, Love FM News: And police in Orange Walk need to be on their toes at all times and that’s because revenge can come in any form and at any time.

ASP. Fitzroy Yearwood, Public Relations, Belize Police Department: “We know that a shooting of this nature, and like you rightfully put it, based on who the victim was, we believe that we would have had some form of retaliation and to prevent any further loss of life, we rolled out our operations and it is working so far and we hope that we could apprehend these assailants quick enough to prevent any further loss. Whether they want to take the law into their own hands, we are prepared to deal with them when that or if it happens.”

Hipolito Novelo, Love FM News: The two men were standing on Cemetery Street when they came under fire.

ASP. Fitzroy Yearwood, Public Relations, Belize Police Department: “Two persons approached on motorbike and one of them fired several shots in their direction and the driver and the rider of the motorbike then headed towards San Antonio Road and made good their escape.”

Hipolito Novelo, Love FM News: Orange Walk police have since searched several homes but have not been able to identify the shooters.

ASP. Fitzroy Yearwood, Public Relations, Belize Police Department: “Hopefully, with the assistance of the general public, we would be able to identify and detain. While reports suggest that the shooting may be drug related, the investigators are still trying to establish an official motive. Reporting for Love News, Hipolito Novelo.”