Political troubles for the UDP and its leader are afoot as Patrick Faber is being sought by the Police for reportedly assaulting his fiancée with a door and a hammer. We had been following the story since yesterday evening when the news surfaced that Dr Shanikka Arnold was at the Queen Street Police Station in the opposition leader’s SUV which she had purportedly taken from their home in the Lord’s Bank area. Up to mid-morning there were nothing but speculations on the incident. By mid-afternoon, however, the Police Commissioner granted the media an interview on the matter. News Director, Renee Trujillo reports.

Renee Trujillo, Love News: A warrant in the first instance has been issued by the Police for the arrest of the Leader of the Opposition, Patrick Faber. It is an unprecedented situation in Belize in recent history where a serving member of Parliament is embroiled in a domestic disturbance with a looming arrest. The 43-year-old politician is being accused of assaulting his fiancé, Dr Shanikka Arnold with a hammer. He is also being accused of destroying her laptop and is facing charges of both assault and damage to property. Police Commissioner, Chester Williams, told the media that there were two complaints made this week by the victim of two separate domestic incidents. 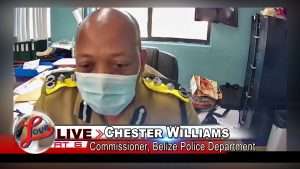 Renee Trujillo, Love News: Up to five o’clock this evening, Faber was yet to be located by the authorities. Commissioner Williams noted that officers have gone to his home and other locations but their search had turned up empty. For some, it may come across as being a bit extreme, and somewhat politically motivated. Commissioner Williams has rejected any allegations of political interference.

Chester Williams, Commissioner of Police:  By law we have to issue an arrest for every person who is arrested by the police upon the complaint of a member of the public so even if you go to the police station right now and you report that Aaron Humes assaulted you we have to issue a warrant for the arrest of Aaron Humes it is standard procedure and every case where the public is the complainant a warrant is always issued it’s the purpose of a warrant in the first instance. So it is not unusual that this is done, it is practice or it is by law what we must do. We are not going to do anything to embarrass the Leader of the Opposition we are going to treat him with the level of courtesy that we can afford to him. I know for a fact that the charges have been prepared and they are just waiting for him to go in and once he goes in he will be served with the charges and go straight to court. It’s a matter for the court to decide whether or not they will grant him bail but we are not going to do nothing to try and embarrass him further than what is already taking place. So long as I am the Commissioner of Police and the complaint is made I don’t care who the person is. If there is something there that needs to be pursued by the police we will pursue it and that’s how we have always operated. So if one may want to say pursuing a PUP agenda I don’t know how this could be a PUP agenda because if it is the allegation made by Miss Arnold is true it was not the PUP who sent Mr Faber to beat her up it was not that’s a choice that he would have taken if the report is sold. So at the end of the day the only agenda we are pursuing is the agenda of making sure that if in fact what she alleged occurred that he faces the law like any ordinary person and simple as that.”

Renee Trujillo, Love News: As for the extent of the victim’s injuries, we understand that she had sustained bruises to the face and injuries to her hand, allegedly inflicted with a door and a hammer, respectively.

Chester Williams, Commissioner of Police: “There is allegation that a hammer was used but she claimed that Mr Faber had hit her on her hands with a hammer causing her pain and yes she did use his vehicle to get to the station to make a report and I guess that was the best available vehicle for her to have been able to escape and go to the police station. Her injuries have been classified as harm. She had some bruises on her face I think she said that it was from her pushing on a door and he was also pushing on the door on the door hit her in the face causing the bruise. “

Renee Trujillo, Love News: The question at this hour remains on whether the victim will recant her story and drop the charges. Police Commissioner explained that it will be ultimately up to the victim.

Chester Williams, Commissioner of Police:  “We try as best as we can to respect the wishes of the complainant. As much as yes we know that situations may exist where the complainant may be reluctant or be fearful to cooperate due to the influence they may believe the person of influence may have we must as best as we can do what we can to assist these complainants and so in situations where statements are given and it is categorically stated in those statements that they wish court action then we will proceed with the matter before the court  and if there is any recanting to be done then the recanting must be done at the court and not at the police station. I know for a fact that all day yesterday and today she had been under extreme pressure from many different quarters trying to convince her not to pursue the matter and she has so far stood her grounds that she is going to pursue the matter and so we go with what she wants. Yes, should there be anything to suggest that someone is trying to  cause her harm or to force her to do something things that she doesn’t want to do let me remind the public that the Criminal Code does provide an offense for attempt to suppress a witness and so anyone who approaches a witness and tries to convince or to threaten or to persuade that witness not to go to court commits an offence. It’s a matter for her to report if she feels uncomfortable with anyone approaching her and asking her to suppress her evidence then such person can be arrested by law.” 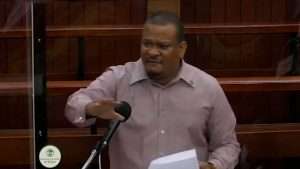 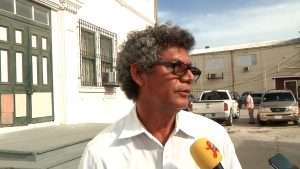