It’s a he said/she said political debacle rolling over from Sunday’s altercation in Teakettle Village, Cayo. Police Constable Alicia Trapp is getting national attention after she went live on Facebook, accusing Minister Julius Espat of assaulting her. Trapp is alleging that it happened during a hotly contested village council election in the village. Trapp’s husband had run for the chairmanship and received support from the UDP. She accused the minister of pointing in her face and assaulting her. Espat continues to deny the allegations. Well, tonight, PC Trapp has lawyered up and now has Attorney Orson “OJ” Elrington on her side. Elrington has written to Police Commissioner Chester Williams asking for a status update on criminal charges against Espat. According to Elringon. Trapp made a criminal complaint against Espat and as such, the PUP politician should be criminally charged. In the letter, Elrington tells the Commissioner that his client has requested court action against Espat. 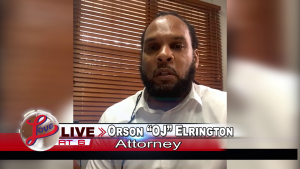 Orson “OJ” Elrington, Attorney: “To the time of this interview there have been no charges levied against Mr.Espat although according to the Commissioner when a complaint is made charges are levied. He should have his day in court to defend against the allegations. So that is what the courts are for. He should have his day in court if that is his defense there are several witnesses who are willing to go and testify to what they observed of which they observed both verbal and physical because Ms.Pat says that he was so close that his spit was flying in her face which that is a violation of the body and so as you would know and anybody would know that is battery. That is a physical attack.”

Reporter: Does Ms.Trapp have video of Espat in her face ?

Orson “OJ” Elrington, Attorney: “Well Ms.Patt does not need to have any video and I don’t know that anybody when they’re under attack they’d be deciding to videotape anybody. What Ms.Patt did have is first-hand evidence of the fact that she was attacked and she went to make a police report and there are several witnesses who are willing to testify in a criminal court, that is what is most important. You don’t need video evidence. In fact very hardly is there every video evidence of criminal offenses, very rarely.”

Elrington says that PC Trapp is being re-victimized and says that she is now being threatened with disciplinary actions.

Reporter: Is this incident turning into a political mess ?

According to Elrington, despite the beliefs of Police Commissioner Chester Williams, police officers are governed by the Police Act, not the Public Service Regulations.

Orson “OJ” Elrington, Attorney: “Police officers are governed by the Police Act and the Police Act is very clear as to what are the prohibitions of police officers pertaining to political activities and in section 34 A 1 B it says you cannot be a scrutineer, an election agent, an assistant election agent under the representation of people act nor can you be a candidate for any parliamentary, municipal or village council elections. So again the excuse I heard him make no TV is absolutely ludicrous and flies in the face of the law. I heard the commissioner wrongfully and erroneously claim that as a police officer she is governed by the public service regulation that is completely false, that is not true. Police officers are governed by the Police Act. I would expect the commissioner to know this so either he is woefully negligent and ignorant as to the law which I highly doubt that he is, he is both the Commissioner of Police and he is a trained attorney or it is that he is so willing to bow down and kiss the proverbial you know what of politicians that he is willing to disregard the law and breach the constitutional right of this individual of course which we would not take lightly and the he and the government would have to answer to the court.”