Concerns arose recently over a finance license of sorts that was granted to the Minister of State in the Ministry of Finance, Christopher Coye. Allegations and speculations that there was something fishy afoot was clarified yesterday by Prime Minister John Briceno. It turns out that Coye was granted a license to conduct financial business and that the license was issued under the previous administration, specifically the former Central Bank Governor, Joy Grant. The company, Phoenix Capital Limited, apparently does not conduct any transactions with the Government. In his response to the issue, Prime Minister Briceno said that contrary to reports, this license had nothing to do with the leave of former Central Bank Governor, Miguel Vasquez.

Dr. John Briceno, Prime Minister, Belize: “They have a company that was operating under the UDP Government. The UDP Government approved those licences and when the former Governor, Manuel Vasquez found out about it because apparently it was not, I’ll try to explain it as best as I possibly can. When he found it in a different file where it did not belong, in some filing cabinet, he started to ask about it and then he was told and he found out there’s nothing wrong. It was straightforward. There was absolutely nothing wrong and it ended as that. So the former Governor, that has nothing to do with him stepping down as the Governor of Central Bank. They do have a sort of limited financial licence. Whether it’s a, I don’t know. I don’t want you to quote me. But yes, they’ve had this from in the UDP days. So if there’s a conflict, maybe you should have talked to Dean Barrow back then. I am the Minister and I am responsible so at the end of the day, if there’s something wrong, you hold me responsible, not Chris Coye.”

Love News found that the license was granted to Coye back in June 2020 by the Central Bank of Belize. The business is registered at the address of his law firm on A Street in Belize City. 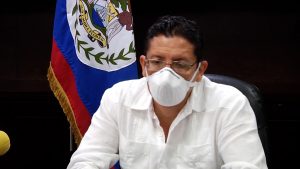