With recently concluded talks with the Millennium Challenge Corporation (MCC), based in the United States, Prime Minister, Dr. John Briceno has commended his Cabinet on turning things around in the economy. His comment comes as a response to questions on the meetings this week with the MCC.

Dr. John Briceño, Prime Minister of Belize: “I think what’s important at this time, at this moment, is that the United States Government and the MCC has seen what our Government has done in one short year, that we have been doing everything that we possibly can to get out through this pandemic to be able to address the issues of poverty and the economy. We feel firmly that the way to address the economy is by growing the economy. Governments cannot be just writing a lot of cheques. We can’t do that. We don’t have the money. We can’t afford it but if we can grow the economy, opening up markets in Mexico, Guatemala, and in the region, we believe that they can create jobs for people and once people are working then they can come out of poverty and the United States, or MCC, have seen the strategy and believe now that they can come in and to help us but there are certain things that they have to see. They have to see that the Government is serious about what they are doing, that they have a plan that they are fighting corruption. They are fighting the trafficking of persons and we have been doing all of that. So we are one of two countries in the world that were chosen and to me, it’s almost like a vindication of the work that we’ve been doing. We had the previous government for 13 years and the U.S. Government, The MCC, never looked at them and we within one year, we managed to convince them. Now that we have signed the compact, now the hard work comes into place because now we have to narrow as to exactly what is it we are going to do, MCC along with the Government. So we’re quite excited and looking at opportunities of what can come either through education, through opening up more markets, and growing the economy and, in effect, fighting poverty.”

Representatives of the MCC were in Belize this week and had met with Prime Minister, Dr. John Briceno on Wednesday. During those meetings, the CEO of the MCC, Alice Albright signed an initial engagement agreement that will give the government one point five million Belize dollars to get the ball rolling. The funds have been earmarked to establish a team of experts that will conduct a rigorous assessment called, “A Constraints to Economic Growth Analysis”. The analysis is being done to give the government a clear idea of the most significant factors constraining economic growth. It will also lend help in identifying the areas where Belize can improve its economic development with funds that will be provided by the MCC’s Compact agreement. //// 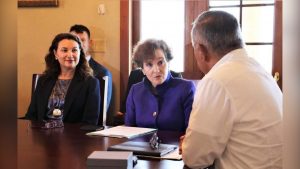