During today’s Sitting of the House of Representatives, Prime Minister announced that the government will support the Waterloo Project once it meets environmental clearance requirements. The announcement was made after the Opposition Leader asked PM Briceno for an update as to what the PM ministry’s is (quote) doing to find solutions to the problems that are stalling the Waterloo Port Project proposal which, if approved will bring tremendous economic development to Belize”. (end of quote) The PM said that the National Environmental Appraisal Committee (NEAC) is tasked with ensuring that the project meets all environmental requirements.

John Brceño, Prime Minister of Belize: “If I recall, this is the man that said that he’s paid for putting words together. You know he said he has made billions of dollars putting words together and even get a Grammy. He’s a multi-millionaire. He just doesn’t spend his money on his party but that’s another matter. I mean, he won a Grammy for rapping but yet he can’t put together a simple question to the House. I mean so. So. I‘m still trying to grapple. You know. I mean I’m trying to. What is it? What is it that he is behind this thing no? It’s quite straightforward. Of course because everybody knows that you’re trying to sing for your supper but in this case, rap for your supper because obviously.” 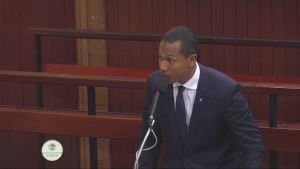 Moses “Shyne” Barrow, Leader of the Opposition: “Madam Speaker, on a point of order, members should not impute improper motives on other members. You reviewed those questions. You made alterations to those questions and he needs to answer the question straight forward.”

John Briceño, Prime Minister of Belize: “Of course, I am compelled to note that this is not the first time that the piper or the rapper, the questioner, that is, has played this tune before. He has raised this issue on the Port of Belize on a previous occasion, if you may recall, Madam Speaker, and here he is, once again, using his privilege as to of questions to raise a matter that could have easily been addressed with a call to the Minister of Sustainable Development or the Minister of Logistics who is responsible for Ports. The law requires a NIACC approval for a project of this nature and magnitude. No less than the health of the Belize Barrier Reef is at stake. The approval process is, therefore, squarely a matter between the applicant and the NIACC. Government will not prejudice this process one way or the other. Madam Speaker, there are no massive projects that this Government has stalled. If the Port of Belize project is a good one, this Government will support it but before we do that, they need to follow the law and they need to go through the NIACC process.”