Prime Minister John Briceno is finalizing his official visit to Cuba. The Prime Minister left the country on April 26 and is expected to return on Saturday. On his arrival in Cuba, the PM was received by the First Secretary of the Central Committee of the PCC and President of the Republic, Miguel Díaz-Canel Bermúdez. During his visit, the PM and the President witnessed the signing of a memorandum of understanding between both governments In addition, a cooperation agreement was signed between the Belizean Ministry of Health and its Cuban counterpart. The Prime Minister spoke to the Cuban press. 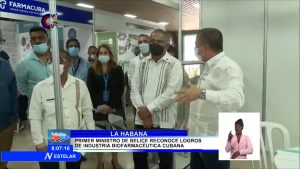 John Briceño, Prime Minister of Belize: “Well really it is to strengthen the relationship. We will meet with the president tonight. We’re looking to sign a new agreement in health and doctors and nurses that are helping us in Belize and other existing agreements. Also to discuss regional topics, I think that there’s business opportunities here. I want to congratulate all the businesses, the scientists, and the Government of Cuba for doing so much, not only for its people but for everyone in this region, particularly for us in Belize.”