Prime Minister John Briceno presented the budget for the fiscal year 2022/2023 this morning in the first part of the day’s Sitting of the House of Representatives. During his over-2-hour presentation, Prime Minister spoke on the achievements of his administration as well as the success in cutting down the national expenditure and the new ways being sought to source additional revenues. According to the Prime Minister, there will be no major tax adjustments.

Hon. John Briceño, Prime Minister Belize: “Belize was labelled a serial defaulter, facing the very real prospect of a painful IMF programme and possible currency devaluation. A year later, optimism abounds that Belize has opened a new exciting chapter. In dollar terms, when 2020 ended, Belize owed over 4.2 billion dollars, a debt stock that has now been reduced to just under 4 billion just one year later. Of what Belize currently owes, external debt total, Belize 2.7 billion dollars Belize or some 72% of GDP, while 36% of GDP or some 1.3 billion dollars is owed to domestic creditors and I’ll give that explanation on that. Apart from resolving the Superbond, I wish to highlight three other major debt management achievements in 2021. First, during this fiscal year, government paid off over 90 million dollars in overdraft advances previously held with the Central Bank eliminating the interest expense of that debt. Second, for the first time since 2014 when the domestic debt stood at 371 million dollars, government’s domestic debt balance was reduced. For the new fiscal year, interest payments on the public debt are expected to rise by $24.1 million from $87.1 million to $111.9 million. For two years, Belize made no payments on external commercial debt, capitalising this obligation in 2020 and including interest accumulated in the Superbond settlement last year. Blue Bond related payments commence in 2022, even so, interest payments represent only 9 cents of every recurrent $1 and even less, 9 cents of every dollar spent. Our medium term forecast suggests that debt service payment will remain at this manageable level, below 10 cents per recurrent revenue dollar for the ensuring four year horizon. Now let me be clear. The public debt emergency is not over. Servicing a public debt of $3.9 billion is a heavy burden which directs funds away from people’s centred priorities such as education, sports, health, housing and citizen security. From both a revenue and spending standpoint. From both a revenue and spending standpoint, Government must be cautious. Therefore, there is no new, major tax revenue measure in this Budget. Yes, we will seek to close certain tax loopholes, to adjust collections for activities such as in the lotteries sector. In summary, therefore, the new Budget targets a Primary Surplus of some $14 million, or 0.35 percent of GDP, along with an overall deficit of $98.1 million or 2.49 percent of GDP. Following a special Cabinet Working Session from February 24-26, I announced the policy decision to restore the 10 percent wage adjustment, which had become effective July 01 of last year. Wages will therefore be restored 2 years ahead of schedule. When I announced the adjustment in last year’s Budget, I committed that it will not last one day longer than absolutely necessary. The Cabinet and I are keeping that commitment. The decision to restore, in dollar terms, translates into an additional $40 million in the Personal Emoluments and $15 million in the Subsidies and Transfer line, for a total of $55 million. Increments, as previously programmed, are projected for reinstatement in Fiscal Year 2024/25, contingent on the fiscal circumstances. This year, $101 million is being allocated for pension payments. Taken all together, wages and pensions, including the wage-related subsidies categorised as Subsidies and Transfers, will total some $704 million. Let me repeat, for necessary emphasis, that stunning figure: Wages, wage-related subsidies and pensions will cost Government $704 million in the coming Budget year. 62 cents of every dollar Government collects in recurrent revenues will therefore be spent on wages and pensions.”

As Prime Minister outlined the cutbacks on expenditure, he noted that the country’s domestic debts amount to just over one billion dollars. Here is how he broke down the report on the country’s creditors.

Hon. John Briceño, Prime Minister Belize: “On the revenue front, total Recurrent Revenue is projected at $1.048 billion, which, when added to $50m in grants and $5.36 million in capital revenues, produce Total Revenue and Grants of $1.192 billion. This performance is 19 percent or $194m higher than the budgeted number and therefore almost double the rate of GDP expansion for 2021. All four broad categories of Tax Revenues recorded increases, with taxes on International Trade and Transactions and Taxes on Goods and Services were the star performers, exceeding budgeted levels by 27 percent and 24 percent, respectively. Non-Tax Revenue exceeded the budgeted amount by about $7 million or 9 percent. The exceptional Grants funding line of $50m is almost entirely the result of the immense generosity of the people and Government of the Republic of China Taiwan. Recurrent Revenues are projected at $1.122 billion, which is 7.5 percent or $86 million higher than the forecasted outturn for this fiscal year. Both Tax and Non-Tax revenues are projected to rise while Capital Revenues will remain constant, and Grants will fall to $35 million, in line with our bilateral agreements. Revenue growth is consistent with the 6.5 percent overall GDP growth forecast of the IMF for 2022 and the Central Bank’s slightly more modest 6 percent growth forecast.”

Despite the positive fiscal outlook by the government, Prime Minister Briceno sounded the alarm that the country is still not out of the red and is still at risk for unexpected events like natural disasters. As for the projected revenues, Prime Minister broke down the figures for the upcoming fiscal year.

Hon. John Briceño, Prime Minister Belize: “On the expenditure side, total spending is projected at $1.217 billion, or $14 million higher than budgeted. Recurrent Expenditure exceeded Budget limits in 4 of 5 categories. In the case of Wages and Pensions, the excess was by 2 percent of the budgeted levels. In the case of debt service, the $19 million in projected additional spending represents the first Blue Bond payments and is a fraction of the debt service payments foregone for the previous two Budget cycles. Now the excess spending in the instance of Goods and Services is the item of greatest concern to me: $50m or some 29 percent higher than budgeted. While we concede that the cut for Fiscal Year 2021/22 was significant, compared to previous years, there must be an acceptance that spending 20 cents of every dollar collected by Government on Goods & Services is intolerably high. The Ministry of Finance will redouble efforts to suppress this expenditure line item but to do so requires an all-of-government approach. I appeal to Ministries and Financial Officers to exercise maximum restraint. Overall spending will rise compared to this year’s projected outturn by $144 million or 12 percent. These increases include the following major spending lines:

The budget reading continues at this hour with the debate scheduled for March 24 and 25. 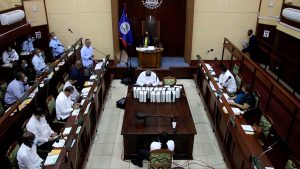