On Wednesday former Ambassador to the European Union Alexis Rosado was criminally charged after he was accused of child abuse. The senior diplomat was charged with one count of rape, one count of sexual assault, and six counts of aggravated assault. He pled not guilty and was offered bail of $5,000 plus two sureties of the same amount. He is to return to court on July 6. Providing details today was Police Commissioner Chester Williams.

Chester Williams, Commissioner, Belize Police Department: “Certainly the police had received a complaint from a female who had reported that for a number of years, she had been sexually assaulted by the former ambassador and I think on one or two occasions she was raped. We conducted a thorough investigation into the matter and a file was submitted to the Department of Public Prosecution’s office for advice and it was last week Wednesday that we received directives from the DPP directing that Mr. Rosado be charged for several counts of aggravated assault and I think one count of rape. He had since been arraigned at the Belmopan Magistrate’s Court in respect to those two, uh, in respect to those matters and the matter is now before the court for determination. It is not strange for that to occur. It had happened on numerous occasions before and it’s a matter for the court to determine whether or not they believe, or they will believe the virtual complainant but you have to appreciate the fact that when these things occur the victim, women for the most part, may be reluctant to come forward, particularly due to the social stature of a person and they may also be other factors that may deter a person from coming forward to make a complaint immediately so it is not unusual for a victim to come forth that late after having been done something by someone.”

Reporter: The law provides for that?

Chester Williams, Commissioner, Belize Police Department: “Yes. The law does make provisions for that, yes. Rape is a complex issue, a complex investigation. As I said that, allegations are easy to be made, difficult to prove and more difficult to disprove. For the most part, it is her word against his and even though, yes, we know that the law has changed where in the past it required that there must be some level of collaboration but that is no more the case. They need not be in collaboration and remember rape is the slightest degree of penetration of the male sexual organ into the female sexual organ so like I said before, it is her word against the accuser word and the court will determine that matter.”

Rosado was one of Belize’s co-agents for the Belize/ Guatemala ICJ case. Reacting to the news was the Prime Minister, John Briceno. 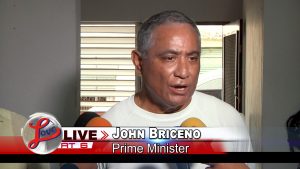 John Briceño, Prime Minister: “Alexis Rosado played a very important role, a senior role, in the work that we’ve been doing in preparing our case to the ICJ but as co-agents what they do is they collate. They put all the papers together. We have different attorneys dealing with the different issues and then they put it together and then go and present it to the ICJ. Fortunately, we don’t have one. We have both, coagents, meaning that there’s more than one. The other co-agent is Ambassador Assad Shoman, senior person when it comes to a senior ambassador and a person, probably the most knowledgeable person when it comes to the issue of the Belize-Guatemala dispute.  So no it will not in any way affect us. My heart goes out to Alexis Rosado on the issues that he is facing but like in everything, you are, our rule of law is based on the presumption of innocence until you are proven guilty and I do not want to comment on that matter.”