For many, the excitement is building as the Government of Belize finalizes its plans and preparations for the arrival of the Duke and Duchess of Cambridge. The couple is slated to arrive on Saturday afternoon at the Philip Goldson International Airport. Representative from several international media including Reuters News Agency, The Dutch Press and the AFP News Agency out of France. Prime Minister, Dr John Briceno, told the media that this is an exciting time for the country, under his leadership. 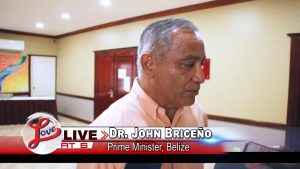 Dr. John Briceño, Prime Minister of Belize: “It’s quite exciting for everybody that His Royal Highness and his wife chose to start their tour in Belize and they are quite excited about having a first look and a close look to Belize, not only to our natural wonders, the sea, but even them going into the communities themselves and have probably a closer understanding as to the dynamics of Belize as how is it that we are so unique, so small but so diverse.”

The Prime Minister is scheduled to meet with the Duke and Duchess on Saturday afternoon at the Laing Building.