Prime Minister John Briceno is tonight making no apologies for making a phone call that resulted in the release of plants imported by Diani Chan of Botanical Gardens by Roselyn. The issue has become one that the nation has been following closely and that’s because it has the appearance of political interference, something that PM Briceno denied today. Chan received nine permits from the Belize Agriculture and Health Authority (BAHA), which falls under Jose Mai’s ministry, to import tens of thousands of plants. Now, the issue here is that under CITES, listed plants must come with CITES documents and it has been the long-standing practice that this particular type of permit is issued by the Forest Department which falls under Orlando Habet’s ministry. So when Forest Officer Daniel Chi decided that the plants would be confiscated for lack of proper documentation, Minister Mai tried to intervene. He failed and that’s when he called the PM. The PM then left a meeting he was attending and made a phone call, not to Chi but to Chan’s mother-in-law. It was during that phone call that Chi was rude to the Prime Minister, refusing to release the plants. The PM says that Chi hung up the phone on him. Weeks after the incident, Chi was placed on a five-day administrative leave with pay after he was accused of acting unprofessional. The administrative leave ends today and he is expected back at work on Monday. But as the Public Service Union has pointed out, the PM did not call Chi. He called Chan’s mother-in-law. Now, this is where it gets interesting because Roxanna is not only Chan’s mother in law, she is Briceno’s employee. She has been working at Shell Gas Station in Orange Walk for many years. That connection there has raised many eyebrows and so we challenged the PM on what many believe is blatant political interference. Here is how the PM responded.

Reporter: Diana Chan’s mother-in-law, Ms. Roxanna, is your employee, so some persons see it as political interference. 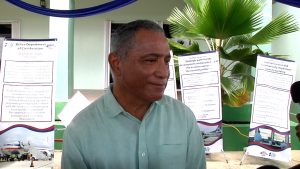 John Briceño, Prime Minister of Belize: “How could? How could you come to that conclusion? It just so happens, yes, that she works with, with, in our company but I did not just pick up the phone and just called her. I called simply because the Minister of Agriculture and because of his frustration with what was happening in this situation that I called. It’s not because oh my employee is having problem so I called. I called because the Minister of Agriculture was very concerned about what is happening to this young entrepreneur. So for somebody to try to say about I’m trying to interfere because my employee, that’s really a stretch and I find it ridiculous.”

John Briceño, Prime Minister of Belize: “That’s not for me to decide. As I said, I’ve done my part and I’ve moved on and if another citizen of this country, a small young entrepreneur, feels themself that are in problems and if they called me and I could answer the phone and assist them, I will assist again. I make no apologies for that. The story here is the frustration that our citizenry have when they’re dealing with the public, with our public officers, that they just tend to just turn him around and turn you around and there’s totally frustrating. I said that as the Prime Minister of this country that my priority is to be able to get this economy going and to be able to create jobs. Here’s a young entrepreneur and I will tell you again, I don’t know this person. I have never said a word to this person in my entire life but the Minister of Agriculture called me very concerned that we have thousands of dollars of plants out there that can be affected because of the bureaucracy and the decision of a public officer and asked me to help, so I picked up the phone and I mek, made the call to be able to call the person, to talk to the person, to be able to try see how we can assist and the rudeness of this public officer is what we all should question and if he can behave that way with the Prime Minister of the country, not John Briceño, but the Prime Minister of the country, can you imagine how he deals with the public?

The former president of the Public Service Union opined on the situation earlier this week, saying that the PM should not have called the public officer. Tonight, we have comments from the former CEO of the Ministry of Public Service, Dr. Peter Allen who told Love News that the government should be reminded that at this time what the public officer is being accused of remains an allegation.

Dr. Peter Allen, Former CEO, Ministry of Public Service: “It seems that the wording is somewhat unfortunate, shall we say. In the case that I’ve heard described on the media, I’m not quite sure why administrative leave would be necessary in order to investigate this particular claim there, this particular charge. But the letter appears to suggest that the officer is guilty of some kind of infraction and, therefore, is being placed on leave but of course, as you are probably aware, administrative leave is not punitive and it is simply in instances where it is thought to be necessary, it gives the department an opportunity to investigate an alleged offence. It appears to be an unfortunate sequence of events and that I would suggest could have been avoided if the regulations were followed by all concerned. But the department does have the authority to place an officer on administrative leave once an allegation has been made, even if the allegation has been made subsequent to the actual allegation of the offence or the date of the offence. So that period of time wouldn’t be what concerns me more than the following of due process and the appearance, and I say this simply as a member of the community, the appearance now that there seems to have been some punitive measure taken against the officer when in fact the officer may not have committed any infraction.