Prime Minister John Briceno has confirmed that he will be pursuing legal action against Leader of the Opposition, Shyne Barrow for what the PM considers defamatory statements. In April, Briceno demanded that Barrow and Channel 7 pay up one hundred thousand dollars each for statements made by Barrow when he appeared on Channel 7’s Uncut with Jules Vasquez. In addition, the PM demanded a retraction of the statements and an apology which Channel 7 has since made. Barrow had made certain innuendos and accusations against the Prime Minister. Those accusations, according to Attorney Priscilla Banner of Courtenay Coye, are outrageous, scandalous and highly defamatory. However, Barrow has since stated that he will not apologise and will battle out the matter in court. And, according to PM Briceno so will he. 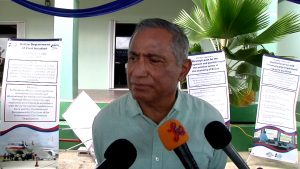 Hon. John Briceno, Prime Minister of Belize: “We all know that the Leader of the Opposition was totally out of line and if he does not want to apologize well that’s to his peril. We know that what was said was scandalous, is libelous and that then he will have to have his day in court to try to defend his words.”

The video of that Uncut edition on Facebook has since been deleted and the portion of the defamatory comments was edited out in the YouTube version.