During our interview with the Prime Minister, we also asked him about the nomination of Moises Cal. Cal has been selected to chair the Public Service Commission, a post recently held by former UDP Minister Charles Gibson. Now, there is the perception that Cal’s reputation is tainted. This is because of a 2007 allegation of money laundering. At that time, Cal was held by authorities in Panama after landing at an airport there with one million dollars in US currency. He left Panama before being questioned and he was not criminally charged for any offence. This morning, PM John Briceno defended Cal’s nomination. 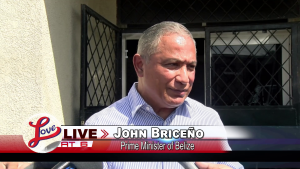 John Briceño, Prime Minister of Belize: “Well I think we need to start off by it’s no other than the Leader of the Opposition is always asking for a second chance and we all make mistakes in life, and it’s not something that then you should, you can reform your life and whether Mr. Cal did or did not do, it was allegations. It has never been proven in court. He was never arrested and so he, I believe, has been an active citizen in Belize, in Belmopan, and I believe he has been a good citizen. He is always helping, assisting people, many people don’t know this but helping poor people. For Christmas he helps several families with food and children so I believe that he had the qualities to be the Chair of the Public Service Commission. Now, there have been rising concerns. A number of people have been raising concerns and others,  people from within the Public Service. So, it is something that we have taken, we will take a closer look. It has not been sent to the Governor General so it is. We will take a look. We’ll listen. We don’t believe that we have all the answers and so, we are taking a look at it.”