Prime Minister John Briceno is on a 5-day official visit to the Republic of China (Taiwan). He arrived in Taiwan on Tuesday morning, leading a delegation. Taiwanese President, Dr Tsai Ing-Wen officially welcomed PM Briceno this morning with a military salute. The president also conferred on PM Briceno the Order of Propitious Clouds with a Special Grand Cordon for his role in enhancing ties between Taiwan and Belize, one of the few remaining allies of Taiwan. This is Prime Minister Briceno’s first trip to Taiwan as the head of the country. We join Senior Reporter Hipolito Novelo for a look at the official visit.

Hipolito Novelo, Love News: Taiwanese president Tsai Ing-Wen rolled out the red carpet for Prime Minister John Briceño who is on a five day visit in the Republic of China (Taiwan). PM Briceño who heads a Belize delegation was warmly welcomed with a military salute. This is Briceño’s first visit to Taiwan as Prime Minister.

Tsai Ing-Wen, President, Republic of China (Taiwan): “This is the first time I have received Prime Minister Briceño since taking office and it is Prime Minister Briceño’s first visit to Taiwan since he assumed his current position. It is a great pleasure to greet a dear friend from afar with our grandest display of military honours.”

John Briceno, Prime Minister of Belize: “Thank you very much for your warm welcome. My delegation is very grateful for the excellent arrangements that have been made for us.”{“ 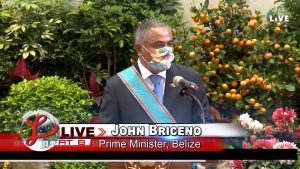 John Briceno, Prime Minister of Belize:: Belize and Taiwan are friends and partners. We enjoy a cordial bilateral relationship which has grown stronger during the almost 33 years.

Tsai Ing-Wen, President, Republic of China (Taiwan): This October marks the 33rd anniversary of diplomatic relations between the Republic of China (Taiwan) and Belize. In recent years our two nations have worked together very closely in numerous fields. Per Prime Minister Briceño’s visit, we look forward to exchanging opinions on issues of mutual interest, deepening cooperation and elevating our diplomatic friendship even further. 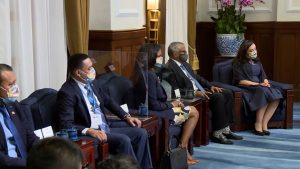 Hipolito Novelo, Love News:  Bilateral talks have begun and according to President Tsai, the Taiwan-Belize Economic Cooperation Agreement has already come into effect. The president said that the preferential tariff treatment and investment protection provides further strengthening of economic partnership. The president also said she looks forward to developing an even deeper bilateral friendship as well as closer trade ties to create more opportunities for cooperation. 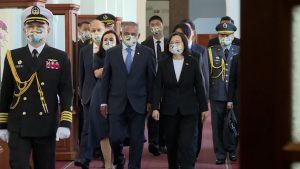 Tsai Ing-Wen, President, Republic of China (Taiwan): Over the past year as a result of joint efforts by Taiwan and Belize more and more Belizean goods are being sold in Taiwanese stores. For example, Marie Sharps, the most famous of all Belizean hot sauces, is extremely popular among Taiwanese people and also one of my favourites. Moreover, in the past few years our cooperation in such areas as agricultural technology, environmental sustainability and culture and education has yielded plentiful results. We have also shared resources during the pandemic jointly putting up staunch resistance against COVID-19. 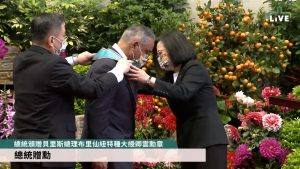 Hipolito Novelo, Love News:  During a state banquet, P.M. Briceño was conferred the Order of Propitious Clouds with a special Grand Cordon for his role in enhancing ties between Taiwan and Belize, one of the few remaining allies of Taiwan.

John Briceno, Prime Minister of Belize: We live in perilous times. COVID-19 has dramatically changed our lives. Inflation is on the rise. Supply chains are disrupted. War rages. Instability abounds. This is not good. We must recognise these critical points in history. At times like these, friendly nations stand united. We must reaffirm our resolute commitment to those norms that we hold sacred.

Hipolito Novelo, Love News:   And that sacred bond that Belize and Taiwan share is important today as war rages on during a time when global events are unpredictable. Taiwan, like Belize, is being claimed by another country, in this case, China, which is why it is important for both countries to support each other and while other countries have shifted their alliance to Mainland China leaving Taiwan with 14 diplomatic allies, P.M. Briceño conveyed Belize’s steadfast and continuing support for Taiwan.

John Briceno, Prime Minister of Belize: We must make a common cause based on our abiding belief in a right of all peoples to self-determination, to non-interference in the internal affairs of countries. The territorial integrity of all nations and the peaceful settlements of disputes. These are the foundational principles of the nationhood of Belize and Taiwan. For almost 33 years, Belize and Taiwan have enjoyed a mutually beneficial relationship. We’re here today as very good friends of Taiwan where partnership is principle. It is strong. Together we will continue to work closely for the mutual benefit of our peoples on this you can depend. In the name of the Belizean people, I proudly proclaim that we believe that the people of Taiwan have the right to live in peace as a nation fully recognised by the international community. We both have the right to live in peace with our neighbours and to participate in international organisations for the benefit of all mankind. Madam President, the Order of Propitious Clouds with special Grand Cordon is a unique honour for Belize. I accept it with humility and gratitude on behalf of the Belizean people. This honour is another tangible symbol of the unbreakable bond beyond our countries and peoples. 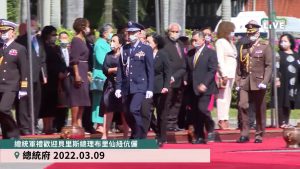