The increase in prices of many of these goods has been caused by the rising cost of crude oil. Countries around the world have been putting measures in place to mitigate the effects of rising fuel prices. In April, Cabinet announced that it established a firm cap on diesel and regular gasoline pump prices per gallon at $13.41 and $13.50 respectively. This cap will be supported through a fuel price stabilization fund to be established by the government with the Central Bank of Belize. Currently, the government has already reduced excise taxes by 57% to keep diesel prices at the capped price of $13.41 per gallon. But how long can the government hold that cap? That is what we asked the Prime Minister, John Briceno. 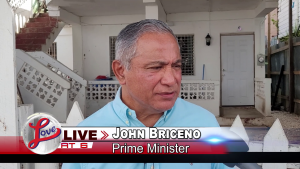 Hon. John Briceno, Prime Minister of Belize: “We have to hold it on as long as we possibly can. I believe that price of crude oil is starting to go down the world market I think yesterday it was at $95 US a barrel so with that we expect that the prices are starting to go down slowly.”

PM Briceno says that on an annualized basis, these tax reductions represent an excise tax loss of over $30 million.  According to Briceno, once the price of crude oil decreases, GOB will move to recover what was lost.

Hon. John Briceno, Prime Minister of Belize: “The idea as I mentioned earlier is to hold it where it is right now and as the price of the acquisition cost of fuel goes down we still want to hold it a bit to be able to recoup some of the expense or the tax dollars that we lost because at the end of the day we do need the revenues to be able to provide the services to the Belizean people. We said from the beginning, and we never shied from that I’ve said it many times that the idea was to set up a fund from Central Bank so as we reducing the tax we could try to replace it we did not do that right now but that when the prices start to go down we can keep it there to try to get back some of it and then start to work on bringing down the price of fuel.”