Twelve religious denominations partnered with the Belize District police formation to engage in a meet and greet session. This was conducted within the community of the St. Martin’s De Porres Area. This initiative is part of a strategy that is being implemented by the police force in order to keep teenage boys from falling into the criminal life. Love News spoke with Assistant Commissioner of Police, Howell Gillett, who explained further. 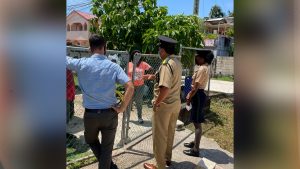 ACP Howell Gillett, Belize City Police Department: “We did a meeting with some 25 young men and following that we did, at least 40 homes were visited and we listened to the concerns of area residents and now we’ll go back and strategise in how we deal with the situation in the St. Martin’s DePorres area. Across the country, we have what we call a meet and greet but it’s done primarily with police officers on a weekly basis but I believe, I’m a firm believer, that the police alone cannot do it. So we have to enlist other members of the community to support us and who better to start with? The churches traditionally is that you attend in a building wherever it is and we must applaud the church for the job they’ve been doing for so many years but more than that, these young men who we visited with today, it’s only maybe on a funeral day or if they have a girlfriend at school they would attend church. So we asked the church to come in with us so, get out from that four walls and come into the streets, to meet with the public but we have no authority to be the, to speak on behalf of the church so that’s why we asked the church to be along with us and then we’ll be asking other community members in the weeks and months ahead to come with us to show young people that we are very serious about fighting crime, not at the end state level where the gun was, or the trigger was already pulled, but even before we reach to that stage.”

Gillett stated that as part of this initiative with the church, each pastor adopted five young persons for whom they are now responsible for. He says that this will be a good way for them to keep abreast of the youth’s activities and making sure that they do not partake in any illicit activities. 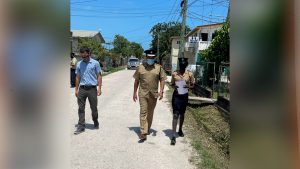 Gillett says that he has several upcoming projects geared at helping young men who are vulnerable to gang violence. He stated that while this will not completely combat the crime problem, it’s a start in the right direction.