Belize City police continue to investigate the murder of San Pedro resident, Desmond Budna. Budna was fatally shot early Friday morning while he was walking on Amandala Street Extension in Belize City. Budna’s body was removed several hours after he was multiple times shot. ASP Fitzroy Yearwood provided an update on the investigation and he says that the case has proven to be difficult. 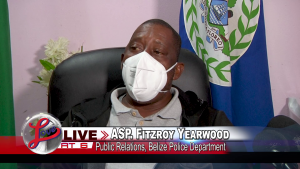 ASP. Fitzroy Yearwood, Public Relations, Belize Police Department: “On Friday, 10th June, about 8:45 a.m., police were called out on Amandala Ext. St. in the St. Martin’s area, where they saw the lifeless body of Desmond Budna, 27 years construction worker of a San Pedro address. Initial investigations revealed that Budna was walking on Amandala Ext. when he was approached by one man from behind who fired several shots hitting its target. No? Budna was transported to the KHMH where he succumbed to his injuries minutes later. Police are investigating that matter. Whether or not you are on the ground for five hours, we the police cannot pronounce you clinically dead. You can only be pronounced dead by a medical officer. So if you’re transported 1 hour, 2 hours later, 3 hours later, only a medical officer can certify your death. His name has never showed up on police radar for any kind of gang or criminal involvement so that makes it a little more difficult for us to investigate. 1. We are trying to establish motive and obviously this would want to seem like a random act of murder. No?”