Police Superintendent David Chi, Police Constable Norman Anthony and two Mexican nationals, Eli Figueroa Nunez and Azarias Manzano were freed this morning after Justice Michelle Arana upheld a no-case submission from the men’s attorneys.  The matter continued this morning in the Orange Walk Supreme Court and a few minutes before midday, the men were free to go after being charged for conspiring to land a drug plane back on September 9, 2018.  Attorney for the Mexican nationals, Richard Dickie Bradley spoke to Love News explaining the grounds for the no-case submission.

Police Superintendent David Chi, Police Constable Norman Anthony and two Mexican nationals, Eli Figueroa Nunez and Azarias Manzano were freed this morning after Justice Michelle Arana upheld a no-case submission from the men’s attorneys.  The matter continued this morning in the Orange Walk Supreme Court and a few minutes before midday, the men were free to go after being charged for conspiring to land a drug plane back on September 9, 2018.  Attorney for the Mexican nationals, Richard Dickie Bradley spoke to Love News explaining the grounds for the no-case submission.

Richard “Dickie” Bradley, Attorney: “In the case of the two police officers David Chi and Anthony, a witness that would have said things that would have required them to respond,  that witness did not show and so their lawyers made submission that in the absence of any evidence the court would have no choice but to follow the law that because no evidence is even against them.”

Bradley, who represented the two Mexican nationals told Love News that one of his clients was badly beaten in custody witnessed by Police Constable Norman Anthony.

Richard “Dickie” Bradley, Attorney: “In the case of the two persons from Mexico; Eli Figueroa Nunez and Azarias Monzano, of the various security forces that were able to capture a drug plane with drugs and engage in a shootout to ward off those who were providing security, some of those persons came to court to say that at various times when they spoke with the Mexican that the persons had said to them that they had gotten a small job to help off load the plane and they didn’t know what were the contents or whatever but when you take people down to a police station and they are supposedly confessing to being involved in a crime there are procedures to safeguard the integrity of what those persons are alleged to have said. It’s always safe to have a Justice of the Peace present to see that they weren’t beaten or threatened or whatever. The law requires that any court; Supreme Court, Magistrate’s Court, would look very skeptical at anyone coming to the court to say somebody told them ‘I was involved in such a serious crime.’ and you don’t have it written nowhere, you don’t have no witness, no evidence for is and so on. We were prepared to have the two men take to the witness stand to say what transpired because one of them was particularly badly beaten and police officer Norman Anthony witnessed how that man was coughing blood and so on but we did not even have to go there because the evidence was challenged in the no case submission that that is not really evidence in a court of law and the Senior Magistrate Patricia Arana upheld the submissions and gave the reasons why she could not allow the trial to continue. I also would like to point out that our colleague on the other side ,the prosecutor who is in fact responsible for prosecution at the Magistrate’s Court level, she conducted herself professionally she informed the court the evidence, or lack of evidence was a matter for the Magistrate and she would not be making any unnecessary submissions. So on that basis the trial which is the result of a plane landing in Belize on the ninth of September 2018 that trial fell apart this morning.”

Love News spoke with Police Commissioner Chester Williams who weighed in on the court’s outcome.

Chester Williams, Commissioner of Police: “Well there was a witness that the prosecution were relying on and all efforts were made to locate that witness for over three days and seemingly the witness went into hiding and cannot be located. The court cannot wait longer and so the defense attorney again made a no case submission on the basis that the prosecutor had not proven their case and we needed that witness in order to establish the issue of conspiracy to import and so the absence of that witness coming to court to testify the prosecutor was not able to overcome that hurdle and so the Magistrate decided to throw out the matter based on the fact that the prosecutor had not established the case at the level that they ought to have in order to proceed any further. Yes he attained the mandatory retirement age of fifty five and so he has retired so there’s no possibility of reinstatement for Mr.Chi.”

Reporter: The other officer ?

Chester Williams, Commissioner of Police: “The other officer Mr.Anthony we’re going to look and see what we’re going to do with him. I cannot say at this time where we’ll go with him. I will seek counsel from my legal office as well as the SolGen office and then we will see how we’ll proceed from there.”

Anthony remains on interdiction from the Belize Police Department following his arrest for suspected involvement in the landing of a drug plane in Tres Leguas, near Blue Creek in the Orange Walk District on September 9, 2018.  The plane was intercepted along with twenty-six bales of cocaine.  The trial began on December 30, 2019 with Chi being represented by David Morales and Anthony represented by Leeroy Banner. 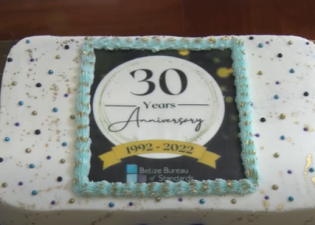