A police officer is on interdiction tonight and more likely, he’ll be fired. That’s because P.C. Balmory Amaya was found sleeping in the middle of the northern highway. Motorists who noticed had to stop their vehicles near the sleeping police officer to prevent other vehicles from running over him. An infuriated Police Commissioner told the media today that he will not tolerate any such officer in his police department: 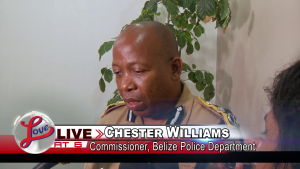 Chester Williams, Commissioner of Police: “I saw the video this morning and I am embarrassed by it. It looks exceedingly bad to see a police officer in uniform in such a position. I don’t know what to say but I’ll just say this we expect our officers to act in such a way that they’re not going to bring disrepute to the uniform that we wear and certainly the officer was under the influence. He had appeared before a tribunal and had pled guilty to failure to provide urine specimen because he was asked and he failed to provide and the only reason one would fail to provide is because you know why. So he had pled guilty for that along with other disciplinary infractions. I have since directed that he be placed on interdiction and I have requested the notes of evidence in respect to his tribunal and it will be reviewed. If there is sufficient there that warrants a dismissal then certainly we have to part company, he cannot continue to wear the police uniform.”

Reporter: Is this an officer that has had problems with alcohol before ?

Chester Williams, Commissioner of Police: “Well he was one of those officers who was brought over from the BDF into police and so we would not have a history of him in police. We have to look perhaps at the military to see if there was perhaps some history of him with alcohol while he was in military.”

Belize Government is to soon appoint a new Chief Justice

Minister Kareem Musa Weighs in on Prevention of Gang Retaliation

GOB is Weeding Out the Rotten Cops

Is Belize ready for almost-imminent “Stagflation”?

Is a $5 minimum wage enough?

Dangriga residents charged with a string of robberies in the south