Police officers early this morning had to jump out of a police pick-up truck after they saw thick, black smoke emanating from the engine. It happened at 2:34 this morning on Said Musa Street near Mopan Technical High School.  We are told that the officers were on patrol in the Hills of Promise Area when the vehicle began experiencing mechanical problems and stopped a few yards from the high school’s gate. Both officers jumped out when they saw the engine smoking. ASP Fitzroy Yearwood told us more. 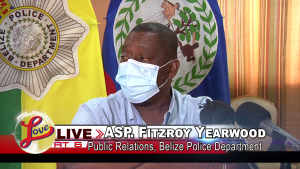 ASP. Fitzroy Yearwood, Public Relations, Belize Police Department: “At 1:40 AM while PC Sacario Cruz and Luis Garardo left their station in a red police Wingle pickup bearing license plate 3392 they were driving when the driver heard a loud bang. He said that he immediately stopped the vehicle where he exited and he was somewhere on Said Musa Street. He says that when he popped the hood no fire was seen so he got back in the vehicle. When they got back in the vehicle he saw fire coming from somewhere around the glove compartment. He is saying that they then exited the vehicle in a little time because the vehicle then exploded when it landed on a wooden structure that was not too far from the street. By the time that the fire department showed up and extinguished the fir two of our police issued Smith and Wesson firearms were destroyed by fire one bearing serial number 0447 and the other BV0025. The frame of these firearms that were burned were found in that vehicle so we can confirm that yes they did burn in the fire.”

Reporter: Any cause as yet ?

ASP. Fitzroy Yearwood, Public Relations, Belize Police Department: “No. We have a motor vehicle inspector that will check the vehicle today and of course the ire department are doing their investigation also simultaneously because we know that these Wingles are old vehicles we have them for quite some time and it might at this moment it would want to seem that it is something electrical.”

There are no reports of any injuries.