The Easter Holiday is one week away, with the lifting of the Covid-19 regulations Belizeans are looking to get away. For those traveling on the sea, particularly, those traveling in private vessels, there are some important points to know. Commissioner of the Belize Port Authority, Major Gilbert Swaso, appeared on The Morning Show today and shared a few tips for boat operators to ensure they keep their passengers safe and that they are law abiding. 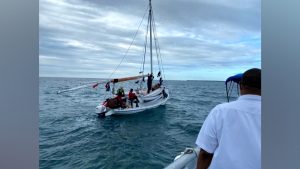 Major Gilbert Swaso, Ports Commissioner, Belize Port Authority: “They need to have a life jacket for every individual plus at the minimum 25% more. So in the event that you have a capacity of a hundred people so you must have a hundred life jackets but you’re also obligated to have an additional twenty five just in case because again there may be some defects so you have to be prepared so safety cannot be overemphasized. So it is important that we have those kinds of equipment. You have to have throwable PFDs, the life ring. You have to have those. Why ? Again when a person falls overboard you need to be able because of panic they’re in a different environment then you need to throw that throwable PFD to that individual so that at least then that person can at least maneuver towards that and then have comfort that he or she will float until the vessel does its manuvera to retrieve the person out of the water. So then you have to have some signaling device, a whistle or some lights again with the view that when that person falls overboard that life jacket should have a whistle on it, they’re making noise so that if you don’t see that individual they can make the captain go toward that individual. And anchor. An anchor is very important for every captain. It is said that no captain must get into a distress with his or her anchor in the vessel. Once you get into a distress it’s important that, particularly and engine casualty, to throw the anchor and the reason for that is that if you have an engine casualty what is the tendency? The tendency will be then that the vessel will become broadside to the wave. No vessel is designed to run on its side and once it comes on its side then waters starts coming in. But if you throw that anchor the weight of the anchor will be at the bow and then it will have the tendency whether it touches the bottom or not the weight of the anchor will keep the vessel’s bow into the wave, into the wind. So the vessel will then jump in the natural tendency to ride the wave so the chances of getting swamped and then submerged is minimized. So those are just some of the fundamental things that even prior to leaving .- “

Troy Gabb, Host, The Morning Show: And it deters you from drifting too far away from your location.

Major Gilbert Swaso, Ports Commissioner, Belize Port Authority: “Yes it slows down the drift rate. Then you have to ensure that you have adequate water for everybody who is going on board because again dehydration sets in quite easily when you’re in the marine environment. Then whatever you can do if you need your sun screen and those kinds of things. So essentially I’m saying that the pre departure checks are very critical even before you depart from port so that when you’re in port at least you know that you have a sense of readiness and preparedness for any emergencies even before you venture out to sea.”

Swaso also warned private boat operators of overcrowding their vessels and stated that the BPA has stationed maritime enforcement officers at the various water taxis terminals to ensure that all safety guidelines are being followed.

Major Gilbert Swaso, Ports Commissioner, Belize Port Authority: “The Port Commissioner does have port managers or maritime enforcement officers­. Those officers have the legal responsibility and the powers to detain a vessel and you’re obliged to give whatever information is requested. For example if one of the port authority officers, similar to a Coast Guard Officer stops the vessel and he says “Sir/Ma’am can I kindly see your master’s license.” you are obliged to obey. “Can I see your sea worthiness certificate?” you’re obliged to give the sea worthiness certificate because on the sea worthiness certificate will also demonstrate what is the capacity of that vessel. So if in fact the capacity of that vessel is let’s say ten persons on board and then there are two then you will be charged for those extra two people that you’re carrying.  Anyone extra then you will be charged for every extra individual that is on that vesse. What we ordinarily do is that we have a maritime law enforcement officer at every water taxi positioned there and one of the responsibilities of that officer is to ensure that the capacity is maintained. So if there is a vessel with twenty five person capacity even before the water taxi leaves from beside it’s dock ….”

Troy Gabb, Host, The Morning Show: But they don’t need to present a manifest prior ?

Major Gilbert Swaso, Ports Commissioner, Belize Port Authority: “Yes it’s a requirement but the water taxi regulation is stating then that the licensee is to present to the port authority a passenger manifest fifteen minutes prior to the departure of that vessel and even with that it is then the responsibility of our officer who is stationed out there to go onboard the vessel to physically count that every passenger on board and then ask the captain to certify that this is in fact the numbers that he count and then the captain concur that this is in fact and then they sign off then that vessel goes on its way. So it minimizes any opportunity for overloading on the public water transport.”

Commissioner Swaso also advised seafarers to check weather and sea conditions before venturing out to sea.