President of the Belize Bus Association Thomas Shaw penned a letter to Transport Minister Rodwell Ferguson on April 12. In the letter, Shaw tells Minister Ferguson for truly listening to the association’s concerns and for the approval for the increase in bus fares. Shaw also says that (quote) we have received an overdue six-month fuel subsidy to keep the industry afloat. It came at an ideal time since we have been operating at a loss for a very long time.” (end of quote) The BBA also received approval from Cabinet for an eight to ten-year permit. Shaw expressed further gratitude saying that (quote) it is something that has been requested for years. I applaud you, and the CEO as well as the CTO for the combined effort in making this a reality”. (end of quote) 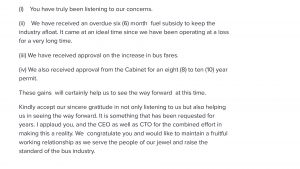