Eamon Courtenay, Minister of Foreign Affairs: Because of the crisis in Ukraine and Russia being an exporter of petroleum, it gives us the clear indication that until this dispute is resolved, and resolved peacefully, that there is going to be a significant increase in the acquisition cost of petroleum for Belize.

Giovanna Moguel, Love FM News:  The skyrocketing of prices is being anticipated as a result of the Russian invasion on Ukraine. Russia is the second largest oil producer in the world behind the United States. As traders shun Russian oil, inflation rates have been on a steep incline and adding huge strain to the global economy, Belize included. Senior Correspondent, Paul Mahung, meandered the streets of Toledo asking the people how the rising prices have affected them. He spoke to a local taxi driver who had this to say.

Paul Mahung: So as an individual, what are you doing about this increase in price?

Taxi Driver: Well actually, I can’t do anything because I am a taxi operator and I have to use fuel everyday. So I can’t do anything. I just have to go with the price for right now. It feels really, huh. I feel really bad about this because, mien, we think everything is going up and now fuel is going up. What do you think will happen to us? All the prices of the goods that we use so much, everything will go up.

Giovanna Moguel, Love FM News:  Gasoline has become an essential component of the livelihood of Belizeans. The tourism industry, which is like the economic engine of the country, is also bearing the brunt of the country’s gas pain. This tour guide explains what measures he has taken to maximise the gas in his boat when he is taking tourists back and forth.

Tour Guide: What I see is that if I have people to take out to the island, I try to put as many people together as possible. Try to make sure that we could take on more people with less than number of trips. For example, I have a trip that went out today. I try to take out my watchman at the same time I take out the guests. Although that’s not the best situation, that’s what I have to do. Explain to the guests, try not to overload the boat or do anything like that but at least try to cut down on the trips.

Giovanna Moguel, Love FM News: Public transportation has been the cheaper way of getting around for most Belizeans. However, motorists aren’t the only ones worried about the effects of the steep fuel prices.

Commuter: I have to catch the bus to come down every time then I’m concerned about the prices raised up because I’m afraid that they’re going to raise the prices on the bus too and how, and right now we don’t have any job so how can we maintain to pay the bus fee if it goes up anymore?

Giovanna Moguel, Love FM News: Other people are being indirectly affected as this Punta Gorda market vendor explained how her small produce business is suffering.

Market Vendor: I depend on the vegetables to come in by truck from other parts of the country because we here in Toledo do not produce all of our vegetables and the trucks are raising up their price but we at the market, we cannot raise our price because it is not, like people have not gotten accustomed to this as yet.

Giovanna Moguel, Love FM News:  Belizeans around the country are upset that the price of fuel is at a record high. The residents of Toledo collectively call on the Briceño Administration to lower the taxes on fuel. This bus driver had this to say in regards to the impact that high fuel prices have had on the country.

Bus Driver: I would say that the authorities who are in charge of increasing the fuel need to look at other areas where perhaps they can get taxes from that area and try to reduce fuel a bit because when fuel is up, everything is up. The farms, whatever, once fuel goes up it actually ruins the economy of the country and it doesn’t help us.

Giovanna Moguel, Love FM News: Reporting for Love News, I am Giovanna Moguel.
Meanwhile, in Dangriga Town, our correspondent, Harry Arzu took to the streets to get feedback from residents on the cost of fuel.Francis Roaches, Taxi Operator: And we all know that Briceño is saying that he needs the interest or the profit to meet his demand or the Government’s demand but yet considering all of that, we guess or we believe that he still could drop the price. $3 less, bring it down to $9. We can do that. Guys, he still would make his little profit. Me personally, I said if he takes it up to $14, right now we are paying $13 something, 13.80 or 13.60 thereabouts. If he takes it to 14, papacito, me, Francis Roaches, I’ll stop running my taxi. I will run my car but when I feel like coming to town then I can come to town, if not, I will sit down right at home.

Man: There’s nothing that you can do. They are in the high places. It is they who should do what they are supposed to be doing so they are not doing their job, like from way back. From I was a little boy they haven’t been doing their job so it’s not anything new.

Reporter: So what would you like them to do?

Man: I just, mien, they need to take down the price, like it’s too high. The price is too too high. 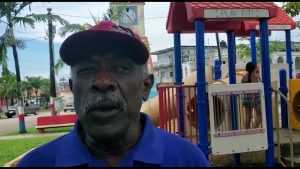 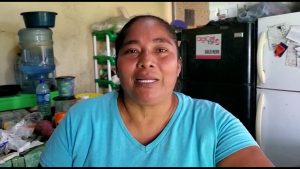 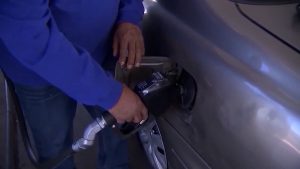