During the interview, the Prime Minister was also asked about Brads Gaming’s lawsuit against his administration. As we’ve reported, the Government’s plan to collect tax from boledo and lottery which for the past umpteen years has been managed by Brads. But the company says that the Government has never taxed the lottery hence the previous exemption in the law. The lawsuit was filed in the Supreme Court back in April to quash S.I. 51 of 2022. Brads believes that the government’s latest decision is (quote) motivated by a political agenda and will yet again result in unnecessary legal costs and losses to taxpayers.” End quote. Regardless of what Brads’ owners and lawyers think, PM Briceno says that the government is moving full speed ahead with the taxation. 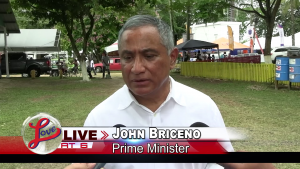 Hon. John Briceno, Prime Minister of Belize: “The Boledo/Lottery was a sweetheart deal and everybody could have predicted who would have gotten that contract in 2020 and as we’ve been going through that agreement we’ve noticed that the government and the people of Belize are foregoing millions of dollars in taxes and it is not right for a small group of people to be able to get away with that. We’re estimating that the 12.5% tax which is what everybody is paying we would be able to collect an additional $6 million dollars. In ten years imagine we gave up $60 million to Brads and to other people that are closely connected to the former Prime Minister. You question why is it that the former prime minister is defending this case and why is it  his son Anwar Barrow is paying so much attention to this case that he logged on to the first hearing of that case so we know that we’re doing the right thing. We believe that everybody should pay their taxes because with the taxes we help our young people, education, health, fighting covid, investing in Belize. So we’re convinced that we’re doing the right thing.”