The PSU is also defending crown counsels in the Office of the Attorney General. As we’ve reported, the Prime Minister, John Briceno, has gone on record to provide the Briceno Administration’s logic to hire private law firms to represent the government in high profile civil matters in court. The only law firm the Prime Minister knows about is Courtenay Coye LLP- owned and operated by Senator-Ministers Eamon Courtenay and Chris Coye. Today, PM Briceno was asked about it again.

Hon. John Briceno, Prime Minister of Belize: “It’s simply a matter that when we have so many of these cases that we need to be able to get more experienced attorneys that can help us with these cases. A lot of the cases that we have the attorneys that we have in the Attorney General’s ministry and it’s no disrespect to any of them it’s just that we are dealing with some very senior attorneys that are bringing these cases against us so we have to make sure that we can get the best possible defense to be able to at the end of the day to defend the interest of Belizeans. We are going to make available the information as to what monies have been paid out but at the same time I find it cute that Chairman of the UDP does not have anything to say when the Barrows were collecting a substantial amount of money or when firms that he’s involved with one way or the other have also been involved one way or the other have also been involved in getting business from the government when he was in government so we are going to answer it we have nothing to hide.”

PSU President Dean Flowers reacted to the GOB’s decision and logic to hire private law firms to represent the government in high profile civil matters in court. Flowers says the comments say that there is no justification to hire private 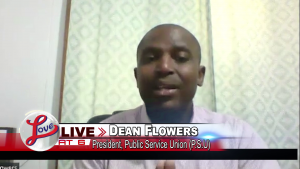 Dean Flowers, President, Public Service Union: “These are young people who come back with a lot of zeal, who simply want an opportunity to shine. And instead of giving them that opportunity to grow and to shine and to experience what it is like to be arguing in court we keep them at that junior level locked up in a room. The comments of the Prime Minister claiming that the legal counsels are no good is outright disrespectful and again unbecoming of the Prime Minister. To see this supported by the Honorable Musa yesterday calling them junior attorneys and discrediting the fact that some of them have in fact been doing research work within the AG’s ministry for some time is also very unfortunate. If these officers are allowed to practice the way they should in providing defense to the government then of course they would gain the experience and grow within the public service. The rate of turnover in the AG’s ministry is very high and the reason why it’s high is because successive administrations continue to keep them locked away from the courtroom.”