On Wednesday the Government announced the appointment of Anthony Mai as the new Chief Environmental Officer. As we told you, his appointment came as no surprise as it was anticipated by the Public Service Union (PSU). Mai takes over the position from Martin Alegria whose retirement was announced last year November. In its release on Wednesday, the Ministry of Sustainable Development said that Mai possesses a graduate degree with a concentration in sustainable development from Galen University and an undergraduate degree in biology from the University of Belize. This according to PSU President Dean Flowers, is misleading. 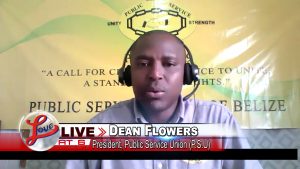 Dean Flowers, President, PSU: “What the release failed to say is that in fact Mr. Mai’s Master’s Degree is in Business Administration and not in the Sciences as is required for the post of Chief Environmental Officer. As I stated, there are other offices within the department who have Masters Degrees in Environmental Studies and environmental related studies and the sciences surrounding the environment. So clearly these people, academically would have superseded, or at least in qualifications would have superseded this Master’s Degree in Business Administration with a mere concentration in sustainable development and I think most of us know about that Sustainable Development Program which I’m not quite sure went anywhere under Dr. Zabaneh at the time, noh? But in any event, it is important for me to note here that Mr. Mai is not the problem here. The problem here is a Department of Environment led by, of course, the CEO who the members consider to be the cause of the problem. I think, in fairness to Mr. Mai, he is only caught in a, what we can perhaps call, in a political game for the CEO’s choice, candidate of choice. So this, please understand that this is not an attack on Mr. Mai and I think when I read the letter from the members as well, they are saying clearly that of the three members that applied for the post, they are not advocating for any one of those members. What they are advocating for is for the application process to be more fair and to be in accordance with what is required or what was required for the post, prior to the vacancy being announced.”

As we reported in February, the PSU has taken the position that the requirements for the highly technical post had been watered down. Flowers, still holds on to that position, saying that senior officers wrote to the ministry voicing their concerns.

Dean Flowers, President, PSU: “We believe that the concerns brought to us are valid and that they ought to have been addressed when they were first raised. They have not been addressed. I had the privilege, of course, of speaking with the CEO in the Ministry of Public Service yesterday to remind him that he had committed to providing these offices, 12 offices who had signed a followup letter dated the 18th of February. A first letter was sent on the 31st of December when the vacancy was first published and these officers, these senior officers who chose, several of them who chose not to apply for the post despite being fully qualified with Master’s Degrees and when I say Master’s Degrees, when you look at some of those who did not apply because they felt the system, sorry the process, would have been biassed, I can tell you that these individuals possess Master’s Degrees in Environmental Policy, in Environmental Planning, GIS, and their experience ranges from 10 to 20 years. Several of them chose not to apply because from the onset when the vacancy went out, they knew that the process was a biassed process and that is the concern that they raised because the department’s procedural manual which dictates what were the qualifications for post of Chief Environmental Officer was not being followed.”

Flowers says that legal redress is an option.