The Vital Statistics Department, under the Attorney General’s Ministry, has long been the ire of the public. Last week, the current AG Magali Marin-Young explained that to solve some of the challenges there, the application of important documents, like birth certificates, must now be an online process. PSU President Dean Flowers added that one of the things that also needs to happen is to staff the unit with seasoned employees. 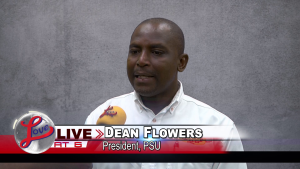 Dean Flowers, President, PSU: “A lot of the problems that they see in those trouble ministries is caused by politicians and the lack of political will to fix the system. Firstly we need to revert to the Public Service Commission for the employment of public officers. If you look at Vital Stats one of the biggest problems there is under the former administration most of the staff there were employed on a temporary basis. Now this is a department that provides continuous service to the Belizean people why would you want to be stockpiling or populating it with temporary workers ? Why not put permanent public officers in there who can learn the system, find ways of how to improve on the service that they’re delivering and then build on that but the way how that department i structure in my humble view and only the Attorney General or the SolGen or somebody would have to show me that they have stopped that practice of employing temporary individuals there. The minute these temporary people do not carry out their political directive they’re terminated .We saw it under the former AG and the former administration and in my view the fact that the problem has not stopped may very well want to suggest that politicians seem to enjoy the kind of instability that exists within that department.”

Flowers agrees with the idea that digitization is the next logical thing to streamline the process of applications at the unit.

Dean Flowers, President, PSU: “It is time for the new AG to stop the lip service, digitize the entire application process and fix vital stats once and for all. She inherited a mess, she is very cognizant that there is exists corruption. I will say to you that I had a personal conversation with the SolGen under the former Attorney General as it relates to what appeared to have been corruption in that department and the attitude seems to be one that they don’t really care, they don’t really care and so I am hoping again that under the current AG that she will not be like her predecessor and that she will move post haste to address the ills that exist there. These things can be fixed but like I said I am pretty quite sure that the politicians are not too keen on fixing them.”