Senators also expressed their views on Government’s Public Sector Emoluments and Allowances Reduction Bill, 2022. What this bull does is return to public officers and teachers their ten percent salary cut taken a year ago. But much has happened since last year and that was pointed out by Lead UDP Senator, Jacklyn Burns. 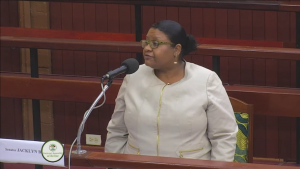 Senate Jacklyn Burns: “That 10% that we lost a year ago is not equivalent to the same 10% that we will be receiving hereafter. The cost of living has significantly gone up and so I know that when it comes to finances in this country there is quite a bit that we need to factor in. I also would like to ask the government to consider the reinstatement of the increments that have been missing for three years. As the cost of living goes up so do the bills in the household and of course the purchasing power for our people. We’re feeling a good financial punch on an individual basis.” 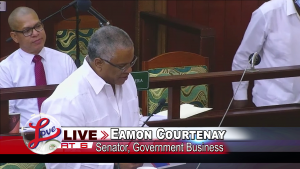 Senator Eamon Courtenay: “A large part of the problem which we recognize but we are understaffed is the price gouging in supermarkets and social media is telling the story and we are not unsympathetic but there are very few price control inspectors available in the country but we are trying to come up with different ways in which that problem can be addressed. The long and short of it Madam President, colleagues, is that with respect to the increments government finance are not yet where we ant them to be. It is out hope that we would be able to retore the increments and to keep the union engaged on that. You would recall that there was a committee set up. The committee is still serving to review the performance of the figures on these matters. So Madam President I ask that the question be put and simply say that we are happy that we have been able to do this within one year and we acknowledge and thank those who have suffered and sacrificed to bring us here.”