The Government of Belize (GOB) announced during a recent Cabinet meeting that Public Officers and teachers will be receiving back their ten percent salary cut. Upon taking up government, the Briceno Administration made the decision to implement a salary reduction to help restore the country’s economy that was left in shambles due to the Covid-19 pandemic. The President of the Belize National Teacher’s Union, Elena Smith, spoke with Love News via Zoom and indicated that while the BNTU membership is welcoming the restoration of their salaries, some remain skeptical as to whether this will come to fruition.

Elena Smith, President, Belize National Teachers’ Union:  “For the most part, teachers are happy. I would expect that they are. I haven’t gotten any feedback to say “Well I don’t want it.” We have heard comments to say, well you know, “I will wait to see it in my bank account first before I say anything.” So you know, we have some people who are doubtful that it will happen. Nonetheless, I believe that the year of sacrifice that they all went through, that we all went through as teachers, and noting that we are now back to school fully and we have to be paying transportation costs and food every day and all of these other things, I believe that teachers are anxiously awaiting that reinstatement so that they can continue to survive a little bit o to have their head a little bit more over the water as opposed to their nose right in the water.”

Minister of Education and member of the Government’s negotiation team, Francis Fonseca says that meeting with the Joint Unions (JUNT) have been cordial and fruitful. According to Fonseca, on July 1, the salary of public officers will be fully restored. 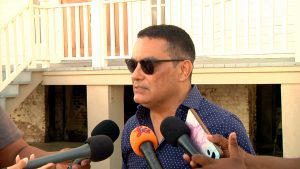 Francis Fonseca, Minister of Education: “We have had positive, very good faith discussions with the joint unions from the very beginning. I have always said, I’ve always made it a point to put on record our gratitude to the joint unions for the mature manner in which they have engaged in those discussions with us. It’s a very, they were painful decisions and you know, since that announcement, I can tell you that they obviously welcomed that decision. They are happy to have the 10% returned. Obviously they never wanted it to happen and so they welcomed that. But obviously they want us to continue working together on other serious challenges that are facing the country. So we’re going. The work is not done. Our discussions and consultations with the joint unions will continue. We have a lot of work to do on constitutional reform, governance reform. We have other issues that we have to discuss. The collective bargaining agreement that exists, there are still some points on hold in respect to that. So there are lots of things that we are committed to working on together but obviously they are very happy about the fact that we have been able to return the 10% two years early. Because as you know in the consultations we told them it would be for three years. It was only for one year and we’re glad about that.”