The cost you pay for electricity will not be increased – at least not at this time. That’s because the Public Utilities Commission examined the request made by BEL and decided that an increase can’t happen right now. It’s good news for consumers but with the rising cost of everything else, that situation may change. Minister of Public Utilities, Michel Chebat was asked about it. 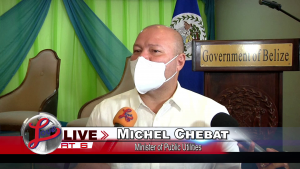 Michel Chebat, Minister of Public Utilities: “Unfortunately the cost of fuel has skyrocketed and spiraled and it has caused the delivery of services to become more expensive and I think we need to take into consideration that these utility companies especially BEL depend on fuel and so the cost of them delivering service has certainly increased. I know that the Public Utilities Commission had approved an increase, BEL says this is not the time for it they did not think that it is the moment for it and as a government we did not feel it is the moment to raise our electricity rates.”

In January, BEL suggested the increase should be placed as debt owed by consumers so the company can be paid later on. But as we reported, the PUC decided to reduce the rate of return for BEL stakeholders to absorb the increase and minimize the cost to the citizens.