A man was murdered over the weekend in Southern Belize. The victim has been identified as twenty-year-old Randy Adomay Xol whose body was found between mile forty-three and forty-four on the Southern Highway in the Toledo District. The Bella Vista Village resident was found at around 2 am on Sunday with bruises to his right eye and multiple stab wounds to his neck. Investigators have so far established that on Saturday night, Xol was socializing with some friends at a restaurant before he was found brutally murdered. According to Police Press Officer, ASP Fitzroy Yearwood, investigators found a bloody pocket knife, believed to be the murder weapon, some seventy-five feet away from Xol’s body. 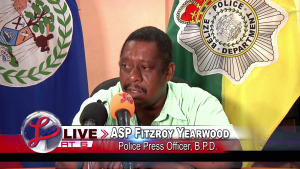 ASP. Fitzroy Yearwood, Police Press Officer, Belize Police Department: “Also on the scene they found a knife that they believe was the murder weapon. Several stabwounds were observed to Mr.Xol’s body. We know that investigators revealed that Mr.Xol was socializing in front of a Chinese establishment earlier on the Saturday night and it is believed that he got into an argument out there which may have led to his demise. We know that investigators are following up on several leads and hopefully if we apprehend these persons that he was socializing with we might be able to answer some of these questions that we are left with.”

Reporter: At this time no one has been detained ?

ASP. Fitzroy Yearwood, Police Press Officer, Belize Police Department: “Well they have several persons detained and they are following several leads but nothing to bring an arrest so far.”

Our newsroom also spoke to Quan Cal, the victim’s uncle, who stated that Xol’s family is in shock. He says that Xol was not a troublemaker and had no enemies so the family is left clueless as to why someone would want him dead.

Quan Cal, Uncle of Deceased: “He is a working boy that works in the banana farm. He doesn’t have any problem with other boys and he doesn’t smoke anything. But I don’t know how this problem came that they stabbed the man. I’m so sorry for him because that is my nephew. Like I said because his parents are good parents. His mother she is a Christian woman, she goes to church and she advised her son to be a good boy which I heard the message from his father calling me and I was surprised when I heard that my nephew got stabbed. We want to know why those officers didn’t come as quickly as possible, that is the point that we want so that people that they are bad because the law was very low for them and that is the point that we don’t like. We want the law behind the people who is rough and if they’re bad well the law can take care of it.”

Reporter: And you guys don’t have any idea why they would have wanted to kill your nephew. 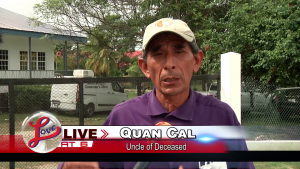 Quan Cal, Uncle of Deceased: “No I don’t have any idea.”

Reporter: Did he have any enemies ?

Quan Cal, Uncle of Deceased: “No. He doesn’t have enemies because like I said he’s a good boy and he’s a young boy yet.”