As was mentioned, the CARICOM SICA Summit resulted in the adaptation of the Joint Declaration of San Pedro, with commitments to strengthen foreign policy consultation; actively collaborate on socio-economic development matters, including tourism, trade and investment; and strengthen cooperation in Climate Change and public health. The Heads also signed unto a revised CARICOM–SICA Plan of Action adopted by Foreign Ministers of the two regions last month. The action plan highlights specific areas for joint dialogue and commitment to implementation, evaluation and follow-up. It seems like a long list, but according to Foreign Minister of Panama, more needs to be done. In fact, FM Mouynes says that both regions must realize the power and strength that can be exhibited if unity is truly achieved. 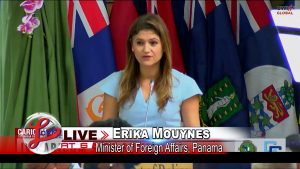 Minister Erika Mouynes, Foreign Minister of Panama: “It is not only that it has been 11 years but there is also something very important happening in the world, something very grave and very difficult. So the fact that 22 countries are coming together cannot be lost on us and the power and the message that that sends,it’s also extremely important so we need to embrace it and understand. As we go back to this quasi normality, we need to figure out how we’re going to focus our energy. How we’re going to focus our attention and think about it now as a way of survival because there is no margin for error. What we were hearing before, I want to make it even more grave and more profound because the pandemic itself left us with a terrible toll. Having only 8% of the population, we have as of now 27% of death. So 8% of the population, 27% of death, that’s a terrible terrible ticket that we all bear, we all share and we all need to reflect on it and the same actually, probably worse also happened with vaccines. We were all struggling trying to find those vaccines and to get access, unequal access, while other countries were able to provide for themselves quicker and better and that health situation also sent us into one of the worst recessions, economic recessions and since we are trying and struggling now to come out of that economic recession, the situation in Ukraine sends us back and it will probably do worst as we were hearing with the price of oil, with fertiliser, everything that we need for our survival, for our agriculture. So as we’re trying to recover and in this pivotal moment, we need to think about, how are we using the power of 22 states here together? And in every single multilateral platform, we can come in as a blog* and we can set the pace or not and we can be proxies for others to decide what they want to do with us. So this is an incredible moment, an important one to set a common agenda. Central America together with the Caribbean is unbeatable in this hemisphere. We know it and we’re not using it. The agenda, the common agenda, if it is at the end, the only way of  survival for our region and we need to embrace it and make sure that we come out stronger, more powerful, and recognising what we can do. We are, as we were hearing, one of, at the end, the regions that most contributes to this planet in terms of climate, yet, has some of the harshest consequences and there are multiple and millions of dollars that are mobilised daily and they’re not coming to our region. Again, Central America and CARICOM together, can make a harder bargain for them.”

“The scale of the crisis we’re facing, whether it’s climate change, the COVID-19 pandemic, migration, unsustainable debt levels, or transnational organised crime, cannot be solved by either subregions, alone or together. These challenges are global in scope but have serious regional ramifications for which we lack the resources and capacity to overcome. Our subregions are heavily dependent on international cooperation and upon the multilateral system at a time when global governance is under severe strain. Our challenges are systemic and structural. These challenges require urgent attention and solutions. The international financial system, as presently operated, denies funding to the countries that need grants and concessional financing the most, countries like our. The G20 efforts to advance reform of the global financial system, including the inevitable phasing out of fossil fuels has been lacklustre. Developed countries have failed to provide sufficient climate finance to countries like ours that need it most. Many of our countries struggled to access COVID-19 vaccines despite a plethora of pledges to make vaccines available. Even in this state of fragmentation, there’s no substitute for multilateralism especially for nations like ours. So we count on you, Mr. Secretary General, on your leadership to reform, renew and revitalise the UN system and the wider multilateral system and I can assure you that you can count on our support for realising our common agenda.”

Calling for unity also was the President of Costa Rica, Carlos Alvarado Queseda. President Alvarado says both regions must closely work together to achieve important goals. 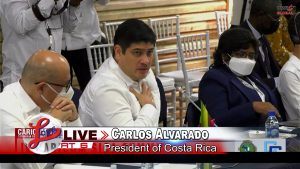 Carlos Alvarado, President of Costa Rica: “I would like to make an intervention with the essential elements that unite us and with what we should work on and my proposal for the Heads of States and what we need to do is to ask our teams to work. 1. Action plans, SICA-CARICOM Action Plans to be closer together. I believe that there are two essential areas in this: 1. Connectivity. I believe that everyone has experienced, we can share in the previous meetings how sometimes we need to travel to other parts of the world to find a connection in order to reach to our own countries. If we have a closer connection between our countries we will be able to do many other things. Also our language, efforts of a multilanguages. I believe that the most important area today in what we should be working on together is in our voice, in our common voice.”

Joining the leaders at the opening of the CARICOM-SICA Summit was the Secretary General of the United Nations, Antonio Guterres.