Former UDP Minister Rene Montero Senior is still wanted by Belize Police. Authorities have tracked Montero Senior to the United States where he is reportedly receiving medical attention. His son, attorney Rene Montero Junior has promised that as soon as his father is back in the country he will hand himself over to the police. This is what Police Commissioner Chester Williams told Love News a few weeks ago. Tonight, Montero remains in the US and ComPOl Williams is still hopeful that he would hand himself over. Montero is accused of using government assets and resources for personal gain. An Interpol Wanted Poster was issued and says (quote) “it was discovered that the Montero Sr directed and permitted the use of Government of Belize property assigned to the ministry at Cayo District Unit, Santa Elena Town, to carry out work on his personal private property, family member’s property and close associates, therefore abusing the power of his office.” End quote. Those within Montero’s party believe that this is a witch hunt prompted by political motives. Today, ComPol Williams told Love News that Interpol protocols require due diligence before a wanted poster is issued. 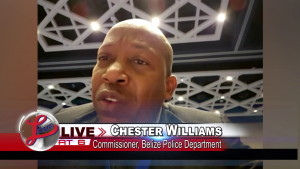 Chester Williams, Commissioner of Police: “We do know that INTERPOL is not a political body and as much as yes we try as best to make sure that it does not meddle into political affairs when it comes to the whole issue of wanted persons there is a certain protocol that interpol would normally go through before they post a wanted person on the portal and so we believe that what is there currently is good. We don’t want to tamper with that because at the end of the day like the whole constitution of INTERPOL has said that it is not to be used for any political victimization or political gain and so once we see something goes on INTERPOL as a wanted poster, a person, it simply means that it had gone through the entire INTERPOL due diligence and they are satisfied that it is not political witch hunt that is being done hence the reason it is then posted on their portal for the world to see.”

Reporter: Okay so that leads me to my other question when you spoke about wanted person, is Rene Montero still wanted ?

Chester Williams, Commissioner of Police: “Well certainly yes he is still on the red notice for INTERPOL as a wanted person. We had asked INTERPOL months ago to upload the wanted poster on their portal and at first the fact that Mr.Montero is a former minister they had to do their due diligence to make sure that what is being done is not political. Having gone through the due diligence they were satisfied that it was not political and hence the reason the wanted poster was posted on their portal.”