It’s been almost thirty years since baseball was considered a serious sport in Belize but now the quest is on to find 20 of the nation’s best to revive it. If you think you have what it takes, tryouts continue this weekend at the Lord’s Bank Field. One of the organisers is coach, Anthony Smith who told us more about what they’re looking for. 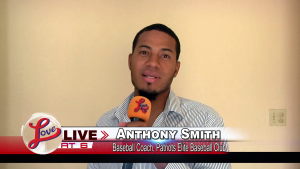 Anthony Smith, Baseball Coach, Patriots Elite: “Recently we’ve been trying to put together a team of twenty of the best players in the nation doing try outs. We did tryouts in Belmopan the next location right here is in Belize City at Lord’s Bank then we’ll touch down to Corozal to do tryouts to find the twenty best players in the country to put together a team that will play in Mexico, Guatemala and other countries. You have to be eighteen and older and we’re looking for three things. Discipline, sportsmanship and respect so you can be part of this team because we’re all in this together and you have to set the example because this is what this team is for to set the example to the younger players that we have here in Belize.”

Smith was born in Crooked Tree Village but spent most of his life in the U.S. He told us the rationale behind coming back home to embark on what is likely a challenging venture.

Anthony Smith, Baseball Coach, Patriots Elite:  “Why ? Because I see there is a lot of potential and talent in this country and I feel like Belize can be just like Cuba, the Dominican Republic and Puerto Rico because we are a Caribbean country and we have the natural genetics like what it takes to be baseball player. If you go around any other country they play baseball and they’ll tell you we’re waiting for Belize to be a part of this right here. Mexico plays, Honduras, Guatemala plays Belize is the only place that doesn’t play but they will be playing soon and on a big stage.”

The Patriots Elite Baseball Club is looking for players at various positions and the coaches participating in the tryouts are from across the Caribbean, the U.S. and as far away as Venezuela. Smith can be reached at 635-8190.