Police in Dangriga are investigating the death of 38-year-old Ronald Gill. Gill was stabbed and killed on Saturday afternoon in Dangriga Town. Gill was at a fast food establishment when a second person came up to him and stabbed him. A fight ensued and Gill was killed. Hipolito Novelo reports.

Hipolito Novelo, Love FM News: On Saturday afternoon, 38 year old Ronald Gil was found dead with a knife in his chest. He had been stabbed several times by a man who he had a fight with. That fight broke out in George Price Drive in Dangriga Town while Gil was at a local food vendor. 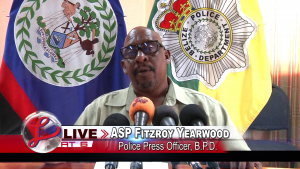 ASP. Fitzroy Yearwood, Public Relations, Belize Police Department: “Mr. Gil was at a fast food establishment on George Price Drive when a male person known to him approached him. An argument ensued between both men and it is alleged that the male person pulled a knife from his waist and inflicted several stab wounds to Mr. Gil’s body.”

Hipolito Novelo, Love FM News: But before Gil was stabbed and killed, the suspect left the fight and later returned. He left, presumably, to retrieve the murder weapon, a kitchen knife. Edna Broaster, who saw the entire incident, says that if police arrived when she first called, the killing could have been avoided. 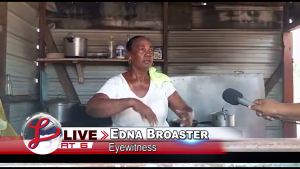 Edna Broaster, Eyewitness: “I don’t know what the argument was about. They were arguing with one another out here. One went so. Pungas went so. EP went so. Like 20 minutes after, EP came with a knife. It is going the boy was going and he took him back on. He gave him eight stabs back on. In his back. All I could have done was bawl and bawl out here. So many people were out here. Nobody helped. From the time the argument started, I called the police. I told them to come because things are happening out here. They didn’t come. I called again. I called again. They said they were on the way. The last call I gave them I called and told them that the man was dead. Like half an hour after then the police reached. The last stab that he got back here made him drop, then he got over him like this and he continuously started to stab and I started to bawl. It’s the first time I’ve seen something like that. The whole day that was on me. The whole night I couldn’t sleep. Yesterday that was on me. This morning was the same thing because it’s the first time I’ve seen something like that happen out here.”

Hipolito Novelo, Love FM News: A truck trailer from the Dangriga Town Council was passing by and it was in that trailer that Gil’s body was placed and rushed to the hospital. However, it was too late. Police now have a murder investigation on their hands. Police Press Officer, ASP. Fitzroy Yearwood says the suspect, one of Gil’s relatives, is in police detention.

ASP. Fitzroy Yearwood, Public Relations, Belize Police Department: “I know that investigators have someone detained and hopefully by the end of today we would be able to levy charges against that person. At the same time, no argument would warrant you to take someone’s life so we are just waiting for directives and then we will know exactly what we will charge that person.”