Tonight, a resident of Rural Belize is half a million dollars richer after winning the Mega Bingo Jackpot on Wednesday night. Forty-seven-year-old, Eugene Moody won the Jackpot of six hundred seventy-four thousand two hundred and eighty-two dollars and will be taking home five hundred seventy-three thousand nine hundred eighty-nine dollars and seventy cents after taxes. The father of two says he bought two tickets before he headed home. When he was checking his tickets he couldn’t believe that he had won. 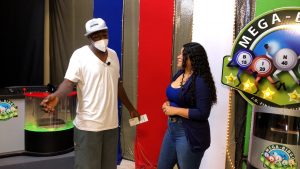 Eugene Moody, Mega Bingo Jackpot Winner: “My wife was in the kitchen making tea and I was just sitting outside in the chair and as it was going by on my phone, because it was on my phone I was watching it on Facebook, as it was going by, I was ticking off the numbers them you know. And as it was going by I said wait, it reached down to the last two numbers and when it came to 28, I said “Babes, I feel like I win this thing you know.” Because what happened was that all of the patterns, they hadn’t really been marked out yet because I got into the game late. So as the lady, the young lady was calling out the numbers them, at the same time I was ticking off the rest of them that I hadn’t ticked off earlier and at the same time, I was going through I said, I was telling my wife “Babes, I win you know?” and she was saying “No!” I said “ Yes!” Boy but when I, I jumped up and I started to do a little dance and thing like that. You know these kinds of ways? And I said boy. Then after that, all kinds of thing started to go through my head so like, but just for a moment, then after that I just put down the ticket and I started to drink tea and but it was still on my mind and I kept mentioning to her, babes I think I won you know. For real, but then again the person in the place said “Somebody has won” even me, I told myself, boy I feel happy for the person who won. Not knowing it was me. Yes.”

Reporter: So you came in this morning?

Reporter: Tell us about that. Why did you come in?

Eugene Moody, Mega Bingo Jackpot Winner: “Well, what happened is like what I said. I wasn’t so sure of the ticket because I myself didn’t believe so I came in to really make sure and as I reached downstairs I said “ MIss, you can check this for me because I’m not so sure you know but if I even, maybe I won the who do you call it? The Letter X or the In House, someone of them. Maybe I won something so I was telling her even if I won 750 I don’t mind. That’s what I was telling the young lady downstairs. So what happened is, when she really got it from me and checked it and everything and went through it and she said “But Mr. Moody you win the ticket! You won the Mega Bingo, the jackpot.”  I said “No.”  She said “Yes!” I told her alright but then right there that’s when I started to feel a little kind of, you know those ways?”

Moody says he has been buying Mega Bingo for years and is now planning on using his winnings to build a house and pay some bills.

Eugene Moody, Mega Bingo Jackpot Winner:“My plan is, like what I said, I never really owned a land and a house so my plan is to really build a house, you know, for me and my wife with enough space. Sometimes things are like from hand to mouth and you know, you’ve got kids going to school and you have to pay their bills. I mean school fees. You have a lot of things that really would want to be dealt with, you know? And some bills too, I’d really want to finish paying off some bills because in life, sometimes when ends don’t meet you have to end up borrowing a little money and things to pay off certain things and to get certain things that you need no? And this came in handy.”

Reporter: Mr. Moody, tell us, do you plan to continue buying and playing Mega Bingo?

Reporter: And would you encourage others to play as well?

Eugene Moody, Mega Bingo Jackpot Winner: “Yes ma’am! I encourage people to get on this Mega Bingo and, you know, try your luck because who knows? Even me because what happened is I have been buying this for a while now and what happened is from, I think last month, I bought two tickets and I came close to two numbers left and I told myself I won’t give up. I will try again and I tried again and, you know, it happened.”

To date, Moody is the largest single winner of any gaming jackpot in Belize. 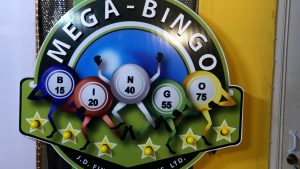