The San Cas Super Store inside the Belize Defence Force Price Barracks Compound in Ladyville was burglarized. It happened sometime between last week Monday night and Tuesday morning.  Stolen was an assortment of duty-free items including one hundred and ten packs of cigarettes such as Benson and Hedges and Camel. The thieves also took several many bottles of liquor including Buchanan’s 12yrs litre whiskey, Flor de Cana, Jägermeister, Johnny Walker double black whiskey, Cognac, and W. Lawson Scotch whiskey. Also stolen were chocolate bars such as Snickers Munch and Toblerone Chocolate. They also got away with many cans of Axe body spray, Axe deodorants, Dove deodorant, and Dove body spray. The total value stolen was two thousand, two hundred and seventy-four dollars and twenty-one cents. The entire robbery was caught by surveillance cameras and today we asked Minister of State in the Ministry of Defence Oscar Mira about it. 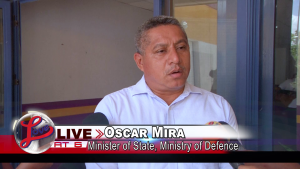 Oscar Mira, Minister of State, Ministry of Defence: “It’s a police matter. It has been handed over to Ladyville Police to investigate. Of note is that Price Barracks is divided in two. We have the Belize Defence Force side of Price Barracks and then you have the BATSUB side of Price Barracks. The store is located in the BATSUB side of Price Barracks. There’s a video that captured the incident and police are investigating at this time point in time and I think they have made some headway I have not gotten the results of the investigation as yet but all indications are that it was probably done by a member from BATSUB side. It is a duty free store for BATSUB personnel so it’s not for BDF it is for BATSUB personnel as part of the agreement that BATSUB and the British Army has with Belize they have access to duty-free and that is a duty free store so indeed there will be those items of liquor and cigarettes and they cater for the British soldiers so there will be mostly those items for British male soldiers so I guess that’s the reason why those were the items that were stolen but it is a duty free store for BATSUB not the BDF.”

Searches were conducted in twelve rooms of the British Army soldiers but nothing was found.