As we mentioned, several persons lost their lives over the weekend due to road traffic incidents. Unfortunately, the tragic trend continued this morning in San Ignacio Town with the death of sixty-one-year-old Herman “Kaibil” Valdez, an employee of the San Ignacio, Santa Elena Town Council. Reporter Giovanna Moguel tells us how it happened.

Giovanna Moguel, Love FM News: The San Ignacio – Santa Elena Town Council lost an employee in a road traffic incident earlier this morning. It happened on Buena Vista Street near the police station at around 10:30. A maintenance worker at the San Ignacio – Santa Elena Town Council, Herman Caibil Valdez, was carrying out his daily duties when an SUV coming down the hill began experiencing mechanical problems. According to the Mayor, Earl Trapp, the vehicle ran into Valdez’s direction and hit him then collided into a parked vehicle. 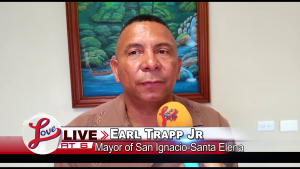 Giovanna Moguel, Love FM News: Valdez sustained severe injuries to the head and body and was taken to the hospital to receive medical attention. Mayor Trapp says that Valdez was a hardworking person.

Earl Trapp Jr., Mayor of San Ignacio – Santa Elena Town Council: “I understand he was completely broken up and even his skull, you know. It is sad, as Mr. Caibil, they used to call him Caibil, no? He was very much humble, respectful, and very very hard working so certainly we will miss his good work that he used to do in our towns.

Giovanna Moguel, Love FM News: Mayor. Trapp says the town council has taken into consideration that several unfortunate incidents have happened in the area and in this case, had there been more people around, it could have been a mass killing. The town council has decided to turn the street into a “one-way.”

Earl Trapp Jr., Mayor of San Ignacio – Santa Elena Town Council: “At some moment in time, we have to take actions and I think this is the ideal action. This is the time to take action and now make that hill a one-way hill because of the fact that several accidents have happened there already in the same light. One whereby the trucks or the vehicles would just run down, lose its brakes and run right into people. You know? That’s a busy area and I’m just thankful to God that there weren’t people clustered or gathered because, basically, it would have killed so many people.”