Belize Water Services Limited (BWSL) is tonight apologizing to the people of San Pedro, Ambergris Caye. If you live on the island you’ll know that for weeks the residents there have been suffering from ongoing low water pressure and outages. It’s not just one area of La Isla Bonita. It’s the entire ‘ilsa’, the entire San Pedro water distribution system has been compromised. In a release today, BWSL explains that on Friday, February 25, the Water Treatment Plant on the island suffered a major mechanical malfunction due to a damaged gearbox. That gearbox, weighing a massive 1000 pounds was expedited to the US for repairs. The company says that the gearbox is already in the country and being rushed to San Pedro for immediate installation. And while that may be good news for San Pedro residents, BWSL is asking for a bit more patience. That’s because the water storage was depleted which means that the low water pressure and outages will continue for the next few days. Acting Operations Manager at BWSL Hugo Rancharan told Love News that it took a herculean effort to immediately ship the massive gearbox to the US for repairs. BWSL workers will be up all night installing the gearbox. Rancharan explained the cause of the malfunction.

Hugo Rancharan, Acting Operations Manager, BWSL: “Basically we have three trains that were supplying the islands with water. Unfortunately one of those trains went down and so we are only supplying with two trains. In terms of production, we are going at least meeting bare minimum but unfortunately the demand is much higher. Over the years, that would suffice but now since we have new infrastructure, new development, new tourism going on, so we need to match that demand. Unfortunately, three trains won’t suffice to do that. In terms of an update, we got the gearbox in country. We had to expedite it to the U.S. for repairs and now it’s in country and it’s being rushed to San Pedro for its installation. However, we need to install it and in a sort of way, get back our storage since we’re running with two trains and those got depleted. But as of now, we’re doing installation and hopefully by tonight we get that solved and sort it out and start producing water, whereby we can provide the San Pedranos with good quality water.”

Reporter: So Mr. Rancharan you kind of froze a bit but I’m not sure if you explained or mentioned what caused the malfunction.

Hugo Rancharan, Acting Operations Manager, BWSL: “The malfunction was because of a gearbox. That’s a gearbox that does the transfer of the energy from the Caterpillar Engines, that’s the type of engines that we use to power the RO plant. That basically broke, so to speak, and we needed to repair that as quickly as possible.”

Reporter: Okay, I’m trying to figure out if it broke because of wear and tear, poor maintenance or just overload, work overload?

Some 4269 are being affected. It took the company somewhere between 20 to 30 thousand US dollars for the repairs. Dion Vansen lives on the island and is a reporter for the San Pedro Sun. He has been reporting on the low water pressure for weeks and he told Love News that residents are growing frustrated.

Dion Vansen, Journalist, San Pedro Town: “Most of the people that are affected are people who live like on second or third floors, who at large parts of the day and night, they don’t have any access to water and some other areas, they do have water during the day but at certain times, like in the evening, they will also start to experience low water pressure. But the ones that are mostly affected are persons who live on top floors who may not have a water pump to pump the water because the pressure is low. So this has been happening for quite some time. It has been already too many days and people are getting frustrated because you know some people, again like I said, they can’t really do their chores as they used to. They have to go fetch water from the ground floor or somewhere else.”

Reporter: In their press release, BWS says that due to the depleted storage the company will need to continue with reduced water pressure and planned late night interruptions for several days. How frustrating is it for you and other residents there to hear that this will continue for more days?

Dion Vansen, Journalist, San Pedro Town: “Well it’s, I guess most people will not be totally satisfied that okay the problem has more or less been solved because we have the damaged part that will allow the plant to produce more water has been repaired and it’s going to be installed so that will tell you that okay then, so that means that we will have back the normal water pressure and there will be no more interruptions quickly. But I guess they have been using their reserves and they need to fill them back.”

Vansen explains that residents always suffer low water pressure when during the high season of tourism on the island. That’s because big hotels, resorts and restaurants, with their pumps, use most of the water. 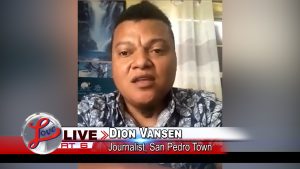 Dion Vansen, Journalist, San Pedro Town: “Usually, whenever the island is experiencing a surge in tourism like right now the island is busy with tourism, the demand for water goes up. So that’s one reason the people think that may be the cause, that there is a higher demand for water. Also during Easter that the island gets, again, busy you have not only tourists but you have also, Belizeans that come to the island to enjoy their holidays and agai the demand of water is higher and so people on the island have notice that during those times is when we usually have or we usually experience low water pressure or water interruptions. So I don’t know if it’s a coincidence that during this time is when we experience an issue with water but the company is always saying that it’s due to mechanical problems and not really because of the demand. So we don’t know. We have to hope at the fact that BWS will continue improving their services as they have been saying and that as they just said a while ago in a press release that they are working to install the damaged part of one of the gearboxes in the plant.”

Human Resources and Public Relations Manager for BWSL, Haydon Brown,, says that the situation will be resolved before the upcoming Easter Holiday. This is when the water demand will increase tremendously. According to Brown, BWSL is venturing into new projects that will enhance services. One of the most significant move is the shift from diesel powered engines to electric engines.

Haydon Brown, HR and PR Manager: “Certainly whenever things of this nature takes place then our water sales definitely goes down because then people would want to use more of the water but it’s not there and so our plan is to ensure that the quantity or the demand, you know, is met by our supply and so is why Mr. Rancharan had indicated that we are putting all our efforts in ensuring that all the gearboxes and everything that is required on those systems, being the Reverse Osmosis Systems are up and running to their fullest capacity so that we can 1. Start to restore our storage which has been depleted but then also being able to, as we build hta up to increase our pressure so then people, I mean people start to enjoy the fullness of our services. There are quite a number of initiatives that the company is currently undergoing. Basically we have purchased a new osmosis plant and we have the older one that we had purchased from consolidated water.”

Hugo Rancharan, Acting Operations Manager, BWSL: “We’re going to get rid of the Diesel engines because of the high cost of fuel. That is one thing we need to be cognisant of. By doing that, by going to electric then we have a more stable output in terms of production. You also reduce your operational costs in terms of that. But yes, we do need, we’re looking at increasing the number of trains and number of plants to meet demands because during Easter as you rightly said Hipolito, it’s increasing and there is an overload per say that we must meet.”

BSWL is asking residents and businesses, especially hotels, to conserve water until the gearbox is successfully installed. 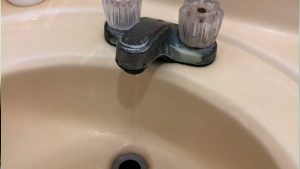