The Commissioner of Police Chester Williams has confirmed that the residents of San Vincente Village cannot legally keep the man suspected of poisoning their water system out of the village. As we have reported, the suspect is in police custody and he is accused of trying to poison the entire community by pouring an insecticide called Malathion into the water reservoir. The villagers have signed a petition to have the man, who we are told is mentally ill, expelled from the village. Williams says the villagers cannot infringe on his rights to free movement despite the circumstances. 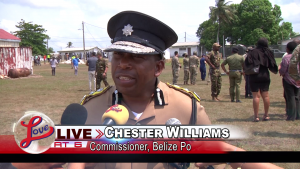 Chester Williams, Commissioner, Belize Police Department: “The last I checked, under the constitution as Belizeans, we’re free to move around this country any part of the country we want without being impeded by the police or anyone except in situations where we have committed a crime and the police is there to detain us and certainly if it is, yes, he is the one responsible for the poisoning of the water system then it’s a matter for the police to deal with. Once we have the evidence that indicates that he is the one who did it, he should be arrested and charged and so the officers in Punta Gorda Town are doing what they can to be able to get the evidence that we would need to effect an arrest in that matter.”